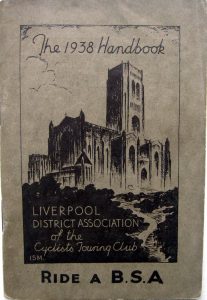 This article by the well known author and bicycle traveller Bernard Newman (1897-1968), appeared in the 1938 edition of the CTC Liverpool District Association’s year book.

Tragically the lives of the gypsies with whom Newman became acquainted, was without doubt about to change forever as WW2 approached..

A Bicycle Among Balkan Gypsies.

In Bulgaria the gypsies thought that I was bewitched, and that my cycle was thing of magic.  Once and entire tribe of gypsy brick-makers  ran away screaming in fear at my approach.

Yet it was in Bulgaria that I met my only example of rogue gypsies.  All Balkan gypsies will rob you quite cheerfully, evidently under the impression that they are doing you a favour by relieving you of the weight of your own possessions, but physical attack is rare.

Foolishly, however, I had once allowed the rapid nightfall to overtake me, and was pushing my mount disconsolately along a dusty track- difficult to ride by day, impossible by night.  From nowhere there appeared two nomads and, lest they laid hands on my pack, urgent action was necessary.   The darkness confused the free fight, but one of the gypsies got in the way of my fist and went down.   I took advantage of the mix-up to get away.  It may be impossible to ride on a Bulgarian road in the dark, but I did it.  – you never know what you can do until you are scared.

I reported the incident to the prefect of police at the next town, in case there should be a row,  I told him how I had knocked out one of the gypsies.  ‘Didn’t you kill him?’ asked the prefect.  ‘No, I don’t think so’.  ‘No’.

‘What a pity’ said the prefect

People who read about gypsies in books picture them as romantic.  So they may be – but try sleeping with them!  A whole family is accommodated in a cow-skin wigwam; with fifteen or sixteen swarthy figures you lie at random on the mud floor..   None of the children up to the age of twelve wear any clothes at all, and the others don’t seem to have removed the clothes they first put on.  The scent of human bodies is almost overpowering – few of the gypsies have washed since birth, if then.

In Hungary and Romania there are certainly tribes that come closer to the ‘romantic’ label.  These are the musician gypsies.  In these days, few of them are nomads – every big hotel in Budapest and Bucharest has its own band of gypsy musicians.  Yet I prefer the more natural setting to gypsy music – the village green on a Sunday evening, ablaze with colour as dozens of men and women in gorgeously embroidered costumes swirl round to the haunting wail of the violins.

Not the least intriguing is the method of payment.  Half a dozen times during the evening a gypsy will make a collection.  The others don’t trust him – they are certain he will steal half the money he collects.  Their method of surmounting this difficulty is ingenious.  They place a live fly in the palm of the gypsy’s left hand; thus he cannot steal from the plate in his right hand, without releasing the fly.

I never saw such marvellous thieves as the gypsies of the Balkans.  Compared with them, the Maskelynes (?) are mere amateurs.  On one occasion I lay with my head on my pack all night.  I was awake all the time – the fleas saw to that! – but when I got up in the morning all the contents of my pack were missing.  With the help of armed police I got back all I had lost, but one item from pack could not be recovered.  Evidently under the impression that it was a magnificent jewel, they had stolen my reflector from my rear mudguard., and not even the threat of police bayonets tickling their tummies would induce them to give up such a wonderful prize.

I never really got used to the table manners of the Balkan gypsies.  We would sit around a pot and fish with a wooden spoon for a piece of meat.  This we nibbled., and if we didn’t like it we would toss it back into the pot and fish for another piece.  I was always unlucky – every piece I fished out seemed to have been nibbled by someone else first. 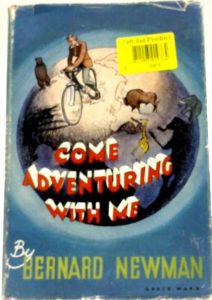 So, for all their faults, the gypsies of the Balkans are grand company.  A night by the camp fire listening to their age-old melodies; dusky faces peering through the gloom, suddenly gleaming in a spurt of flame – even if the fleas are troublesome and the pickpockets professional; the scene lingers long in the memory as something many leagues apart from our normal prosaic world.  And at least the notion that my bicycle is magic had one good effect – no gypsy ever attempted to steal it.

Who were the gypsies?