With the publication of the 1911 census, we now know more of the sad ending of the life of Walter Henry Dutton, the artistic author of the 1887 Sketchbook Diary.

Walter died aged 47 years of a kidney infection after spending almost two years in Lancaster Lunatic Asylum. He was admitted in a confused state shortly before Christmas 1907.  His address was given as 5, Hygeia Street, Liverpool.’ immediately to the left of the house pictured below. This is on the corner of a main thoroughfare, West Derby Road, along which Walt must have cycled on his adventures. The factory illustrated faced Walt’s home. It was possibly Ogden’s Tobacco.  Walt’s occupation was described as  ‘Licensed Victualler’.  His sister Amy signed his admission to Lancaster.. 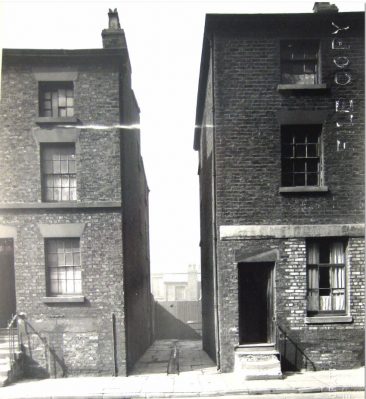 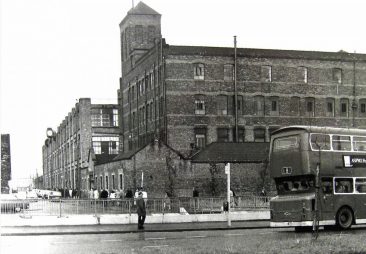 Medical advances since that time leave little doubt that he would now be treated in the community, with every likelihood of a long and productive life. He married and left behind a family in the Everton area of Liverpool.  It seems he was estranged from his family.

Most certainly Walter deserves a place in the folklore of the north west of England, if only for his fascinating evocation of a time long since passed. Up to the present none of his direct descendants has been in touch, although there must be many still living around Merseyside who do not realise we have a family root seeking the light of day. We have only one photograph of him. This was taken upon his admission to Lancaster Asylum. There is a self portrayal of him in his diary entry of the 28th May 1887 on his Knutsford Tour. 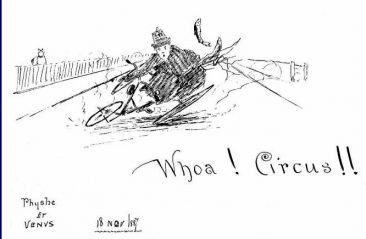 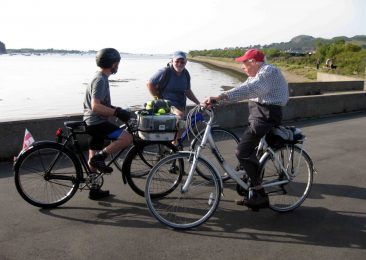 It is interesting to note that when my late colleague Maurice Clarke and I were working on this diary in 2009, Maurice wrote to me thus:–

I imagine over 100 years ago it was a street (Hygeia Street) of probably mean terraced housing. (It was)
I was reflecting a few days ago about the poignancy of Walt’s decline in his latter years. At the time of the composition of the sketchbook he was intelligent and often witty in an ironic way.

His education or upbringing had presumably included some acquaintance with classical mythology.  I wonder whether he may even at some stage have studied Latin. You will have noticed the somewhat recondite caption ‘Physbe et Venus’ in his 18th Nov sketch that I have put at the beginning of our introductory page. It is a picture of Amy (I presume) losing control of her trike and the fish that she has presumably just purchased go flying in the air, although the setting is in the country with a carthorse looking on.

I tried to look up Physbe et Venus in my Dictionary of Classical Mythology and also on the internet but without success.
It was only recently, while reading a brilliant new book about Shakespeare, that it suddenly dawned on me that Physbe might be a version of Thisbe.  In A Midsummer Night’s Dream Bottom and his fellow rustics are rehearsing a play they have written based on the story of Thisbe and Pyramus: at the end of The Dream they put on their production for the court, in which Shakespeare sends up amateur theatricals. Just about everything that could go wrong with their show does go wrong – I have seen a performance at Stratford that had the audience rolling in the aisles. On YouTube there is an entertaining video of the Beatles performing this scene (I bet you never realised the Beatles had played Shakespeare).

Searching further on the internet I find that Thisbe can sometimes be spelt Physbe.  In the myth Thisbe is panicked by a lion and in her haste to escape drops her veil with ultimately fatal consequences. In the sketch Amy on her trike is going so fast she loses her fish.
Amy is also a beautiful young woman, and so in addition to resembling Thisbe in that she loses things when in haste she also is a Venus – the Goddess of Love: hence ‘et Venus’ (and Venus).

Do any surviving diaries or examples of his artistic abilities survive? Is there a painting hanging on a wall somewhere? And can any of our web visitors help with the many intriguing puzzles this diary presents? We’ve solved many of them. One or two remain.