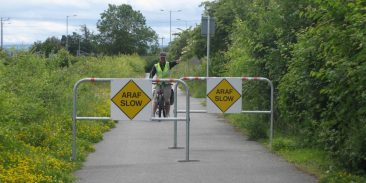 In the Spring of 2015 three monstrous chicanes appeared on the pathway through the quiet nature reserve at Rhuddlan. This route is used by commuting and leisure cyclists.

Not having been consulted on this development and having received complaints from cyclists,http://www.newsnorthwales.co.uk/news/150050/cyclists-angry-over-new-barriers-at-rhuddlan-nature-reserve.aspx the National Charity CTC (Cyclists Touring Club) lodged a Freedom of Information request for an explanation from Denbighshire CC’s Highways Department.

This revealed correspondence from North Wales Police requesting the reasoning behind the barriers on the basis that they presented clear risks to cyclists.  It seems there had been complaints of cyclists going too fast.  NWP requested but were denied the opportunity to speak to the complainants in order to evaluate their complaints in terms of rider numbers, and the frequency and nature of the behavior complained of.  A measure of intransigence was observed from the council’s side in avoiding compliance with this request.

A further information request by CTC for the electronically recorded numbers of cyclists passing through the reserve, revealed as expected,significant variations depending on the time of day etc.

However the maximum recorded over 24hrs averaged around 100, with Peak Periods averaging around 10 per hour, translating into 1 rider on average every 6 minutes.  The chances being that most visitors will not even see a cyclist, never mind be involved in an injury risking encounter.

No records were available for the number of pedestrians visiting the reserve, or distance travelled to access.  Dog walkers arriving by car appear proportionately high.  But in terms of daily visits, the perception is that the reserve does not receive a high number of visitors, and being on the village perimeter is not immediately accessible to walking residents – an attractive oasis from the high density traffic nearby though it is. 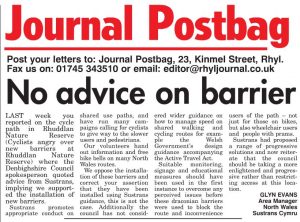 Given these factors, there appeared to be no evidence on file justifying the expenditure of £4,612 (FOI) on erecting barriers without proven need, particularly so as these introduced the hazards for cyclists identified by the police.

All credit is due to the efforts of the police to inject some proportionality into highways intransigence. But this case highlights yet again the uphill struggle cycling faces against not only prejudice, but also the vulnerability of some Officers and Councillors to cycle routing opposition, unrepresentative though it may be.

It demonstrates the need for professionals and other decision-makers to act proportionately on verifiable facts and statistics, and not be swayed by complaints that in all likelihood would have involved minor acts of discourtesy or thoughtlessness at best.

Furthermore it illustrates the pressing need for both local government officers and members to become better educated on the practicalities of cycling, and the need for infrastructure to be adapted accordingly.  Which raises the question as to whether specialist officers should be in place to delivery the Active Travel plans of local authorities.  An essential qualification?   Being a regular and insightful commuting cyclist, with an understanding of the needs of other road users.

See the chicanes for yourself>>>