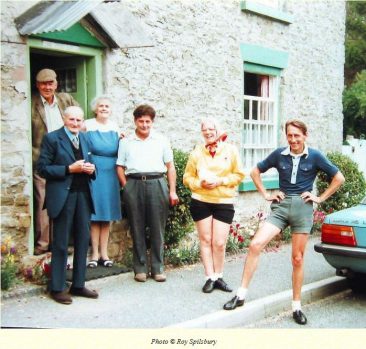 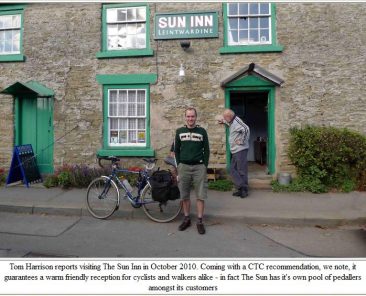 A haven of old, thanks to Flossie Lane.

If you are cycling the Welsh Marches, your trip will be incomplete if you fail to pop in for a pint at the Sun Inn, Leintwardine.

Unique in Britain, this was for long the only surviving example of a ‘parlour inn’ where customers could truly feel at home. This was all down to licensee Flossie Lane who died in 1994, and the public spirit of Nick Davis, Gary Seymour, and the local community, who were determined that Flossie’s spirit would live on after her passing.

You’ll find that cyclists, walkers, and dogs are particularly welcome – The writer well recalls in the 1970s when he chanced upon a couple of tandemists who introduced him to Flossie and her home from home.

At that time customers drew their own ale from the the barrel and paid directly into a dish The photo below is a memory of the occasion I visited.

Little did we realise Flossie (pictured) would still around for a further quarter of a century and more.

The secret of her longevity? Not the drink of the Gods – she was teetotal!

Read more about Flossie in this Telegraph obituary http://www.telegraph.co.uk/news/obituaries/5580597/Flossie-Lane.html

And listen to what Jeremy Paxman had to say in this BBC  podcast when he visited in July 2009 http://www.bbc.co.uk/programmes/b00lcksz

For further details, visit the website of this CTC approved hostelry http://www.suninn-leintwardine.co.uk/