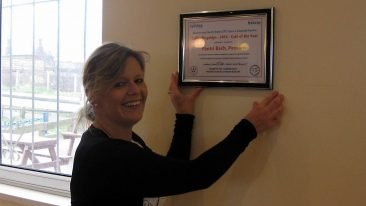 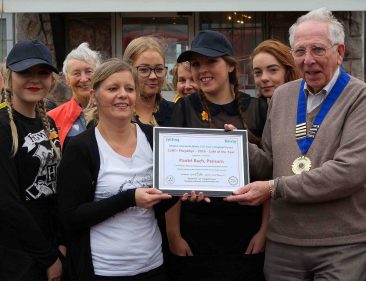 As Storm Doris was winding up along the North Wales coast on Wednesday 22nd February 2017, President of CTC Chester &North Wales (CyclingUK) Mike Cross presented its annual catering award to Julie Williams, joint owner of the Pantri Bach cafe on Pensarn promenade. Together with a gathering of appreciative customers, cafe manager Kirsty Prosser and her staff looked on, cycling clubs Rhos on Sea and Ruthin were also represented.

Introduced in recent years, for the first time this award has gone to a cafe in Wales. It is aimed as a big ‘THANK YOU’ to the proprietors and staff  of the many cycle friendly establishments to be found around Cheshire and North Wales.

In 2015 the award went to the Meadow Lee Farm Coffee Shop at the end of the Mickle Trafford Cycle Path in Cheshire.  This year Cleopatra’s at Holt in Wales was pipped to the post. Ten cafes were nominated.  As the winner cannot be considered for another five years, there’s every chance Cleopatra’s or one of the other establishments could be first past the post for 2017.

One big advantage for Pantri Bach is its location on the North Wales coastal cycle route (NCR5).  It enjoys many miles of superb beaches.  For over fifteen years it has been the Wednesday morning coffee stop for riders joining up at Colwyn Bay to ride over to Pensarn to meet friends from other points along the coast.  Each Christmas around forty sit down to enjoy the seasonal hospitality of the cafe

Apart from the regulars, Pantri Bach is also popular as a watering hole for touring cyclists.  On one occasion the Namibian national rugby team dropped by to mingle with the riders (below).  For many years Audax events have also found it pleasant and convenient to replenish energies there. 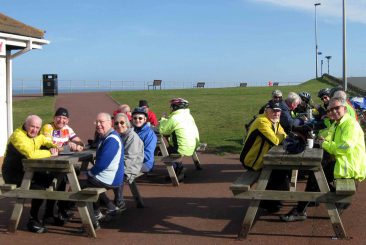