In its short life North Wales was clearly an active DA, with  Western, Central and Eastern sections providing a full program for its members. But it seems likely the wide area covered proved a problem administratively, and as the end of the 1930s  approached it chose to join its more vigorous partner over the English border.

Indeed to its lasting credit its Central section based on Llandudno was responsible for the setting up of the racing off-shoot Rhos on Sea CC,. This flourishes still and is now well past its 90th year.

War time economies, uncertainties and loss of members on active services needed to be faced from the start.

But these challenges were overcome.  As peace returned the combined Chester & North Wales District Association found itself on the national stage in 1949  in the pages of the prestigious weekly magazine Picture Post.

With currently around 1,500 members in the Chester & North Wales region,this 80th anniversary gathering provides a unique opportunity to meet friends of old and make new ones.  This includes CUK members who also have membership loyalty to other clubs, of which there are believed to be more than a few.

A warm welcome is assured to CyclingUK members and guests alike, however they make their way to the venue in the beautiful Vale of Clwyd.

There is also the President’s Ride before and after the lunch.  There will be routes from St Asaph to Llanfair DC and back.  Total approx 40 miles. Meet in St Asaph for an optional café stop. .   Photo call  at 10.45 am with rides starting by 11am.  The routes (as used in 2011) are in the process of being checked and will be available nearer the time.  See the  CTC C&NW website for the latest UPDATE

Hope to see you there. 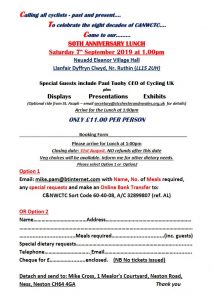