There are many tales of the human spirit overcoming adversity.    Natalie Wilson must surely be placed in the premier league – thanks to her spirit, the support of her husband Dan, family and friends, and the discovered love for cycling. 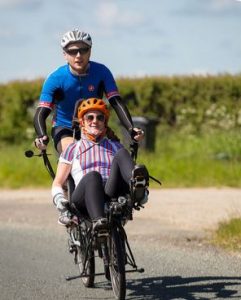 In 2014 Natalie Wilson sat on the front position of an adapted tandem cycle and slowly started to pedal.  She recalls  ‘I will never forget this first experience of cycling after being unwell for so long’ she wrote.  ‘We cycled five miles into the countryside, which was all I could manage at the time.  I was overcome by a new freedom, new scenery and new smells, it was worlds apart from the inside world I had been living in. I forgot about the pain and the relentless schedule of hospital appointments. This is what I wanted to experience everyday – the mundane existence of my life had suddenly been broken, just by sitting on a bike.  Wouldn’t it be fantastic if I could cycle 5000 miles round the UK coastline on my recumbent trike, to tell others about my experiences, raise awareness, meet others with Ehlers Danlos Syndromes, meet others who cycle,  and take on a challenge by pushing my imperfect body to its limits’.   I have had to re imagine my life goals and forgo some of my dreams and ambitions to focus being well enough to get out of bed in the morning. Having spent four years focusing solely on building my strength now is my time to achieve. Natalie’s story caught the attention of BBC TV

The dream comes true – going solo in aid of EDS.

Natalie set off from home in Wokingham, Kent on the 24th February 2018. After circumnavigating  the western UK coastline she entered Wales on the 17th March and the Isle of Anglesey on the 26th      .Over two days she was escorted across the Menai Strait and along the coast to Greasby on the Wirral, by most, if not all, members of CyclingUK.

At Conwy she stayed at the youth hostel. But before departing they stopped off at The Albion Ale House….where good cheer was to be had!  (VIDEO)

SEE THIS VIDEO >>> Upon setting off at 7.30am the following day, her journey was videoed as she was escorted  around the Llandudno’s Great Orme, and along the coast via Colwyn Bay, Rhyl, Prestatyn until her escorts bade her farewell at Gronant..

Crossing the River Dee to the Wirral peninsular she met up with a team led by #CyclingUK Trustee Janet Atherton. After a break at the popular Net’s Cafe on the edge of the Burton Marshes, they proceeded to Natalie’s destination for the night after a stop at West Kerby to admire the views of the Welsh coastline and the Point Of Ayr where she had been hours before,

Since leaving Merseyside Natalie has encountered weather conditions likely to discourage even the most stout of heart but has persevered.      For further details of her remarkable ride visit her blog – and if you are able, why not help her on her way?

Some of the friends Natalie made in North Wales. 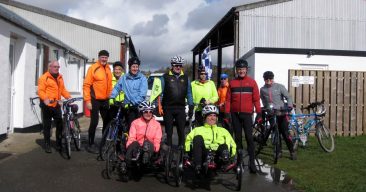 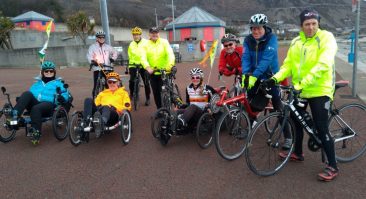