Eighty years have passed since the outbreak of WW2 and the restrictions on motor travel.  At that time the adversary was Nazi Germany.  A foe easily identified against which it was appropriate to control civilian movement on our mainland.   In 2020 we again have  restrictions of movement.   But in this instance the coronavirus (covid-19) adversary is quite different and not easily identified. 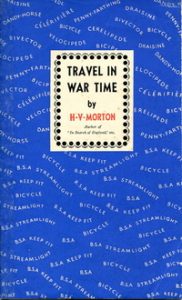 By 1939 HV Morton had already established himself as a leading travel writer when he was invited to contribute the short editorial (below) for an advertising pamphlet handed out free to purchasers of BSA Bikes. The pamphlets, of which very few will have survived, comprised twenty pages and around 2,200 words.  They were probably produced in their thousands.  With soft covers they were held together with a single large stitch; hardly guaranteeing their survival.  Now very rare, an example is to be seen for sale on eBay with a price tag of almost £100.

Realising it’s upbeat message for cycling at a time of great danger to the nation, the Cyclists Touring Club (rebranded CyclingUK) arranged its publication in the May 1940 edition of its monthly Gazette magazine.

With the passing of eight decades since the feature appeared,  and the appearance of the coronavirus, we are witnessing again the emergence of cycling as a preferred means of transport – and in so doing learning much of ourselves and our needs in the process.

All that said, let HV Morton have his say:-

‘It is true to say that before the war , or in the period between the last war and today the world became full of people who for the first time in the history of wandering we’re more interested in movement and speed than in travel. They did not travel to get anywhere.  They travelled in order to move.

Then overnight as it were, the scene changed; the petrol ration has interfered with a national habit, the habit of movement.   It is a habit thousands of motorists who a few years ago used to say that life would be quite insupportable without a car, and that they could not imagine how they existed without one. They have been suddenly plunged into immobility; but not one I believe has committed suicide because of this.  So we learn a useful lesson that in organised civilised community it is easy to mistake a luxury for a necessity.  Indeed the massed forces of advertisement and salesmanship are directed towards that end.

The second lesson that the petrol ration and other restrictions have driven home to everybody, is that until the war is over we must make ourselves happy in our island.  That surely is no hardship.  We must by force of circumstance travel within a comparatively short distance of our homes.  This I think is going to be good for us.

But how should we travel?   This question has been answered by the revival all over Europe of a strange but attractive mode of progression.   The bicycle.    I call it a strange mode progression, because the bicycle is one of the few true pleasures of life in this country which is managed to elude the tax collector.  If that is not strange I should like to know what is.   So far as my own experience goes, the rediscovery of the bicycle is one of pleasant surprises of the war.

I cannot claim to have been a cyclist for something like 20 years.  I never imagined that once again a bicycle would be my treasured and constant companion as in those days of youth when it was always summer.  It was with a twinge of foreboding that I placed my hands upon a glossy new machine some two months ago, and wondered if the art of managing it had completely gone from me.  But cycling, like swimming and riding a horse, is one of those accomplishments which apparently never desert you once you have possessed the knack of it.

The ease and readiness with which you dismount from a bicycle is one of its chief attractions.  It is the perfect way to see and appreciate country because you are always willing to stop and listen; the first rules of observation.   In a moving car, as everyone knows, you are not a part of the countryside; also it calls for greater strength of mind to go on stopping and starting.  I find it difficult to imagine how anyone in these days can be without a bicycle, still nor do I find it difficult to believe that I could ever have been estranged from that machine for so long.

it is ridiculous to think how often in the old days I would take car out for a short journey, when I could have made it so much more pleasant a’wheel;  cycles leaning against the churchyard wall or propped outside a village hall. Instead to tell of a love for good and honest things.  They suggest freedom and simplicity; two precious things.  And they suggest also that those who travelled on the wheels desire to understand the story of our beloved and ancient land.