A fascination for North Wales. 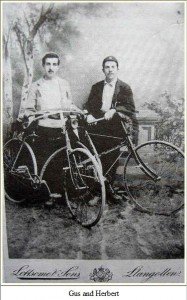 For Liverpudlians North Wales has always had a fascination, not least of all for the generations of cyclists who have crossed the Mersey and Dee to explore its mysterious mountains and vales. In the early 1890s there were 500,000 cyclists in the UK, and none were more enthusiastic than those on Merseyside. Indeed, when the first supply of the revolutionary pneumatic tyres arrived at a Liverpool shop, the police were called to control the crowd that gathered.

It was about this time that John Augustus (Gus) Lunt, and his companion Herbert Hepburn, set off on a four day cycle tour of North Wales. Gus eventually retired to Betws-y-Coed after a career in the family business, which at one stage took him to Burma. He died in 1955.

Wednesday 19th September 1893   Herbert Hepburn & I left Birkenhead about 6pm for a four day holiday to Wales on machines, his pneumatic, mine a cushion tyred Swift 52 weight. Rain came down thick and fast before getting to Queens Ferry, stopped and sheltered under some trees and fixed our Macintosh capes and started to ride through it. Rain stopped before ferry. It was moonlight when we crossed in the little boat, the only passengers. Landed the other side and tipped the boatman 6d and arrived Mrs Davies Flint 9pm. H done up, had done no previous riding so felt it. 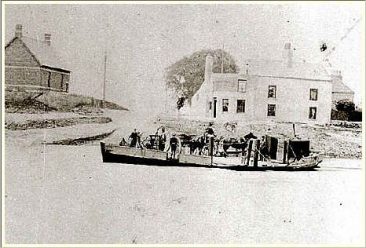 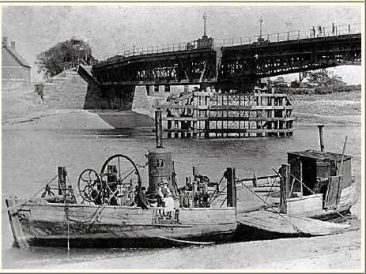 Thursday 20th September Up 7am: nice clear morning, wee bit cold. Breakfast, packed our straps together strapped in our Macs on handle bar. Left Flint and rode to Ffynnon Groew where we stopped and saw Mrs Price who made us stop and gave us a cup of tea, eggs etc. And some of the famous currant cake (Bara brith) and filled our bags with apples. It rained nearly all the time from Flint to Ffynnon Groew.

Left F/Groew and rode on with alternate heavy showers over muddy roads to Gronant and Prestatyn. Here just up the hill H’s back tyre came off the rim, dismounted and fixed it on. Got four little Welsh chaps pumping it up. Gave them green apples for their trouble. Poor little beggars they would want something when those apples began to trouble them. 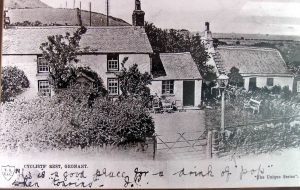 Got to Rhuddlan and went through castle. Off again to Abergele rain now stopped but roads were frightful, inches thick with white limestone kind of mud. Our machine literally covered. Before Abergele discovered my back tyre was slightly split…..comforting !!! Arrived Abergele, stopped at Mrs Purcell, iceberg of a place, got a wash and tea (what a tea) bent a spoon trying to dig jam out of pot, cakes three weeks old (other sundries not recorded). Prowled about town with our Macs on after tea, raining all the time, any amount of wet knocking about. Had a song or two along the shore. Pensarn, very dark, no moon several flashes of lighting out at sea, felt jolly !! Turned in at 9.30pm after talk with some Welsh girl (Annie)

Friday 21st September Up at 7am. Weather fine but sky very leaden coloured. Breakfast 7.55am (about on par with tea) Weather seemed a bit brighter and saw a bit of sun. Left Abergele 9.15am. Very bad road. 2 miles further on improved a bit. Up to here we had not had very much scenery excepting Mostyn way and Rhuddlan but getting up the long hill into Llanddulas the view everywhere splendid, sea on one side and mountains and green foliage with little white houses amongst them on the other side. There are several stone quarries about here also lime works.

From Llanddulas to Colwyn the road goes down hill very nearly all the way with splendid views all along the coastline from Rhyl to Little Orme’s Head. We reached Colwyn Bay 10am. Old Colwyn is the prettiest, Colwyn Bay is the new place. Went down to the Prom to air ourselves on one of the seats there, sun shining splendid, second time we have seen the sun since leaving home. While H is cribbing from my notes I had a wade in the water on shore.

We left C. Bay 11.25 for Betws-y-Coed….good roads all the way up & down turned off road to the left for Llanrwst, passing Conway and Castle on the right. The scenery from here all along the valley of Conway is grand. It beats what I have seen of Killarney, it is prettier but not so grand as K.. Llanrwst 1.30pm stopped….glass of milk etc. Very pretty place down in hollow down hill all the way about five mile into it. H’s tyre off again something wrong with valve leaks. Had a bit of potting here at the rabbits with our revolvers, bagging nothing, splendid missers..

Arrived Betws-y-coed 2.35pm. Grand little place down the hollow hemmed in with trees & woods. Dropped on splendid digs – Mrs Williams Pont-y-Pair House just by bridge over R Conway. Sitting room we had all to ourselves. 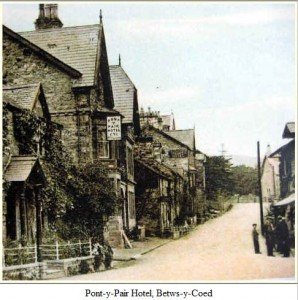 Looked on to river, tea A1. Walked along the river through the woods trying to find Swallow Falls, got very dark and missed our way and got jolly well lost. H nearly sprained his ankle over some rocks. Directed by farmhouse people and managed to get back finally. I wanted no more looking for Miners’ bridges and Swallow Falls in the dark, crawling along on all fours on top of embankments etc….Came back singing. Messed the visitors book about a bit with a little ‘poem’ as follows…..


A little tale I will unfold

About two cyclists of appetites untold

Who pedalled on their way with glee

For the beauties of Betws-y-Coed to see.

After riding against wind and rain

From Liverpool to Flint they came

But their fun was spoiled by rain.

Next day to Abergele only they rode

For the rain came down and the wind was cold

There a fair girl they met

But had no fun because it was wet.

From Abergele they sped in the morning

At Mrs Williams they found rest

For t’was a home, one of the best.

In all their tours they never have found

Of course this name is only used to rhyme

For no other at the time could they find.

Mrs Williams is her name

And Pont-y- Pair is the place

And we recommend the same

To all the human race.

Saturday 22nd September Up at 7am. Dull morning. After breakfast sat reading as it was raining. Went for a walk about 9.45 rained very hard. Came back and had dinner. Packed up again rode up to Swallow Falls saw this time, splendid, came back, settled with Mrs Williams, Oil up and left about 5.15pm.

Bought some views. Rode tremendous long hill out of Betws-y-Coed, rain came down thick again. Off machine and on with the Macs. Some good scenery here for about 5 miles from Betws-y-Coed then country gets flat with slightly undulating roads with good surface. Reached Corwen 8.30 after fearful mud plugging, covered with mud and feet wet through and cold. H’s tyre came off as usual, takes all go out of you pumping that thing up. We changed machines about 5 miles from Corwen. Stopped at Crown Hotel very good place, washed and changed our stockings. Jolly good tea, read & smoked. Bed 11.15pm

Sunday 23rd September Up at 7am. Good old 7 o’clock. Fine morning but cold. Breakfast 8am, both machines cleaned a bit and left Corwen. H’s chain went a bit topside, fixed it up, splendid ride to Llangollen, stopped had dinner at Mrs Roberts Temperance Hotel. Took walk to Horseshoe Falls & back round the town. Left again for Birkenhead, wind against us from Corwen home. Stopped Chester for tea etc Birkenhead 8.35pm. HOME 9.15pm