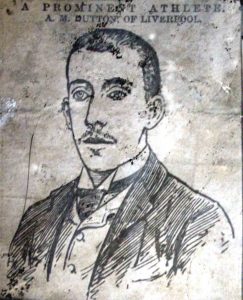 When Arthur Dutton romped home with 500 yards from Snook in a Four Miles Flat race, at Kensington, Liverpool, on the 23rd of march, 1883,  even his own friends were astonished at the issue, as he had never shown form before.  He was the first of the lot who that year were called the “Wirral Dark ‘unns,” and it happened that he and other members of the Wirral Harriers “came out” unexpectedly that season and upset a lot of “pots,” and many calculations of a sharp set of Liverpudlians.   Arthur only won another first in 1883, as the handicappers were down on him, but he picked up three seconds and four thirds.  In the Northern Cross-Country Championship 1884, he was then to advantage, and ran seventh in the race, and first for his club, whose representatives that year took the silver medals.  The summer of the same year saw the subject of our sketch bicycle riding and in August he won his first marble clock at Walton,  coming first in the Two Miles Handicap.  He also won the One Mile, and was second in the Two Miles at St. Helens in the month following, and at the close of the year his list of successes was as follows:-Two firsts, one second, four thirds, and the silver medal gained in the cross country race.  During the winter, the young ‘un, as he was generally called was scampering cross country, this time with the Liverpool Gymnasium Harriers, and in the big contest in February, 1885,   at  Manchester, he ran tenth in the race, and third for his club,  and again got a silver medal, along with his five club mates.  Again the bicycle (an Andrews Sanspariel Racer, 53in.) was brought out, but was propelled with little success until August,  when Charlie Bryan had got his charge in to that pink of condition which is so much toiled after.  He picked up some minor prizes at Stoke, and then journeyed to Whitehaven, and won the One and Three Miles, and was second in the Two Miles Handicap, and won the Ladies Prize for gaining most points during the day.  This was Friday, and next day he was most successful, taking the double event at Preston. The total value of prizes won in two days was 39 pounds.  The Tuesday after Ireland was visited, and during a warm holiday  the “little ‘un” captured a lot of seconds and thirds; and nearly finished his trainer, Mr. O’Brien, as he was called in “Ould” Ireland.  An unexpected first at Pomona, and some small firsts closed the year’s score thus: six firsts, seven seconds, five thirds,  two specials,  and silver medal No. 2-a most successful season.

By the advice of his doctor, Arthur rested the winter, and put on a lot of flesh.  In the early spring a home trainer and  new 54in. Racer made a great improvement in his riding, and he won the Mile at Beverley very cleverly, and was first at St. Helens and Widnes later on.  For some time he “went off” till August, when he secured a gold watch at Barrow as first in the Three Miles, and was second in the Two Miles Handicap.  Two seconds at Whitehaven, first in the Wirral B.C. (his particular club) championship, and a fast time medal in a Five Miles Cross-country Handicap in December closed the year with a record of six firsts, five seconds, four thirds, and one special.  In February of the present year Arthur was wearing the pretty colours of the West Lancashire A.C. in the cross country struggle of the North on Manchester Racecourse, and again had old Bryan got him as fit as hands could make him, and a knowing few were astonished when the little champion ran actually second in the race, and received the W.L.A.C.  Shield for 12 months;and this closes for the present the career athletic of an athlete who was acknowledged to be as game as a pebble, and always a hard nut to crack.  In May we find that Arthur had determined to seek his fortune in Canada, and the Racer that had so often broken the worsted was sold; while the rider, so often seen (for a moment) on the roads about Prescot and Warrington on that little bicyclette on which but a few weeks back he won the Hill Climbing Contest promoted by the proprietors of this paper, has departed to seek fortune in another country.  An athlete more popular would be hard to find; he had what he called a lot of “dead knowledge” and a silent tongue, which made everybody who met him take to him at once.

In a bicycle race he rode better with first-class men, and often won, when he was looked upon  as out of the race, from sheer pluck.  His heart never failed him;  the better his opponent the more did he try to vanquish him.

Departure to Canada to return later to settle here.

Perhaps we have seen the last of Dutton on an English path, and we grieve, for the path is short of such genuine amateurs.  It was a pleasure to help, in our little way, to testify to the regard in which he was held in Liverpool and district at the meeting the night before he sailed for Canada, when good men and true were collected to say good-bye, and show in a small way that they appreciated him, and it was painful pleasure to take a last handshake with that good lad on the Prince’s Landing Stage, Liverpool, on Thursday, 16th June, 1887, and wish him every success in the country he has chosen for his future home.

The exploits of some of our “vintage” veterans simply amaze me. One of the oldest riders in our Diamond Jubilee “100” last year was Arthur M. Dutton, of Liverpool, a boon companion of that other tough nut, Tom Hughes. Mr Dutton is 76, and was performing feats of considerable public interest as along ago as 1887.  Nevertheless he still covers prodigious distances, and this year has ridden to Meriden for the annual service, to Barnard Castle for the meet, to Hatfield for the F.O.T.C. (a round trip of 395 miles in 5 days), to the Lake District for a holiday, and to innumerable other places for fun. Cycling never grows stale to such an enthusiast, and Mr Dutton believes it is the prime factor in the preservation of his health and vigour. Good Luck to him!