A visitor to our site is a descendent of two of the characters mentioned in Walter Dutton’s Sketchbook Diary, ‘Good Old Billy Slade’ and ‘Young Slade ‘. Our visitor writes:

From various photographs, mementoes and medals he won, we knew that William John had cycled competitively and been a cycling club member, but to see William senior fully immersed in the activity too is a delightful revelation. The pictures show our ancestors in a completely new light to the dour expressions we see on the only photos we have of them. I’ve attached a photo of each of them – they look remarkably alike.

William senior, born in Somerset in 1839, would have been 48 in 1887, hence ‘old’ to the 25 year old artist and his young companions. His moustache, a fairly life-long characteristic, can clearly be seen in at least a couple of the sketches (page 17). From censuses we know William senior was originally a coach wheeler in 1861 and later a coach builder in 1871, by which time he was in Liverpool, but by 1881 his occupation was bicycle maker, and he was a ‘Cycle factor and agent’ in 1891.

William John, born in Bristol in 1861, would have been 25, the same age as Walter Dutton – he actually

William John Slade about 1910 age about 49
got married in March 1887 (perhaps the reason he wasn’t quite so much involved that year!). He was a ‘bicycle salesman’ all his life and seems to have just lived and breathed cycles.

We know they ran several bicycle shops, although we don’t know whether there were more than one at the same time, and we are also not sure if William John broke away and ran his own separately. We have a couple of photos, years apart, but the exact whereabouts of each is difficult to pinpoint.

The oldest photograph we have is this one we think of as the ‘Great George Street’ shop. It clearly shows the number 100. From the wording on the shop window, however, it makes more sense to wonder whether perhaps the shop was in Pembroke Road. Gore’s 1880 Directory has ‘William Slade, bicycle maker, 98/99 Prescot Street’ also suggesting a shop there, perhaps even earlier. The Slades’ 1881 census address was 99 Prescot Street and William senior and family lived at 2 Great George Street on the 1891 census.

In the doorway of No.100 can be seen (for certain) William John Slade, hair still dark, maybe about 25 (his age in 1887) and his sister Mary Ellen, of whom we have other photos. The identity of the gentleman in the front is unknown. The Penny Farthing and tricycles are very much in keeping with the machines in the sketchbook aren’t they?

William Slade senior was obviously quite successful making bicycles as by 1901 he had moved to an impressively large house, ‘The Hollies’, 1 Prospect Vale, on the corner of Prescot Road, Fairfield and when he died in 1912 aged 78 he left over £6000. William John died only 3 years later in 1915.

The ‘Pembroke’ Cycle Depot: probably a little before 1887 judging from the absence of any safety bikes for sale
This photo is much later and obviously of a much smaller establishment! It has diversified considerably into records, record players and dolls’ prams! It has No.182 above the door and we think of this the ‘Fairfield’ shop. It could be on Kensington or Prescot Road. Standing in the doorway is George Slade, William John’s son.

Logic says the photo was taken not long after 1913: ‘Cinch Records’ (see the window) were launched in 1913 and ceased production in 1916 (Google) so it cannot be before that. However, the family already lived at another shop at 548 Prescot Road (at the corner of Batley Road) some time before William John died in 1915.

Photo of ‘Fairfield Wheelers’ circa 1910:

pals. ‘Fairfield Wheelers’ is written on the reverse. I would guess it was taken around 1910? (Please advise if the cycles in the photo would date this any differently.)

We have a medallion which relates to William senior’s business, and 3 medals relating to William John’s cycling exploits. 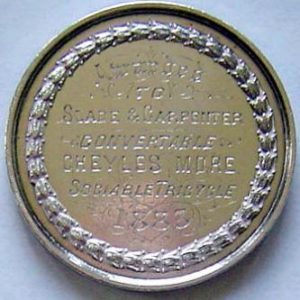 The circular silver coloured medallion, about 5 cm across, is engraved on one side: ‘Awarded to Slade and Carpenter

And on the other side ‘Wirral & Birkenhead Agricultural Society’

(Carpenter was William senior’s wife’s maiden name and for a while her brother Thomas Carpenter was in business with William). 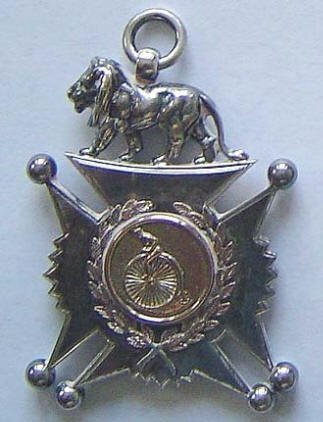 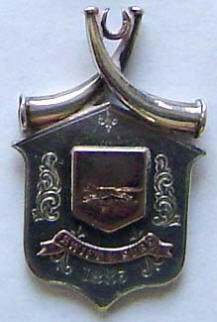 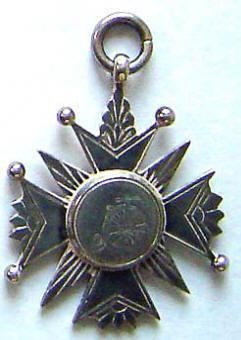 Centre medal: with 2 crossed hunting horns above a fox on a shield above ‘Swift & Sure 1883’. On reverse – motif of a large capital H entwined with leaves (Glover & Wiggin Birm.h)

Medals on left and right: both are blank on reverse and show penny farthing on the front.

William John also had a habit of bringing back souvenir crested-china from the different places he visited, which included Nottingham, Cambridge, Windermere and even John o’ Groats. A tale passed down the family is told of him riding a penny-farthing from Liverpool to Bristol one weekend to visit his Carpenter grandparents!

Editor asks:- Can anyone shed any light on the medallion and medals, or comment on them? We have no idea how rare or common they might be.

The name ‘WJ Slade’ is in the ABC Annual Reports from 1894 until 1904 when he resigned. His address (shown from 1901) was 57 Bold Street, Liverpool.In addition there was a ‘CJ Slade’ who was a member from 1899. He competed in the first 50 mlles event of that year. In 1901 his address was 21 Beaufort Avenue, Brooklands (Sale). In 1904 (the year he resigned his membership) it was ‘Moss Brow’, Warburton, Warrington.Interesting that both resigned in the same year (1904). There might be a little bit more (perhaps) in the Minute Books, but that’s all I’ve discovered so far

The Remarkable Archive of the Anfield Bicycle Club