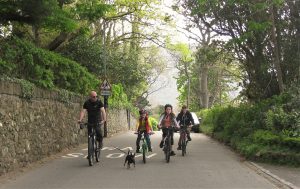 CyclingUK has co-signed letters to the English and Welsh cycling ministers urging them to support the reallocation of road space to people walking and cycling during the coronavirus emergency.

For Wales, In addition to Gwenda Owen for Cycling the UK, the following joint signatories supported the call.

It was been repeatedly warned by CyclingUK and other parties that the adjacent section of NCR5 on the highway risks serious injury to cyclists, not least novices and children unfamiliar with its characteristics and traffic levels.

It has chosen to ignore these warnings (including a formal complaint) thereby exposing individual local authority officers and members to an action for corporate liability in the event of a traffic incident involving injury or death to a vulnerable user.

Just one of the many hazards associated with Conwy Cob

Cycling responsibly.  Sharing with Care – it can be done!