Against a background of protests and appeals by CyclingUK (formerly Cyclists Touring Club (CTC) and Sustrans, Conwy County Borough Council  seems hell-bent on making the journey across the River Conwy by bike as frustrating and intimidating as possible.

Two years ago signs appeared on each side of the footbridge ordering cyclists dismount.  With no recorded history of conflict with other off-road users (Fof I) ,both CylingUk and Sustrans recommended PEDESTRIAN PRIORITY signs .  An innovative example is to be seen on the Grand Union Canal.

It was expected this would receive a sympathetic hearing, particularly as the adjacent carriageway (A547) presents exceptional hazards for cyclists unfamiliar with its challenging characteristics. Youtube Video  . Whilst this was designated as a section of  National Cycle Route 5 around the year 2000 as a millennium publicity wheeze promoting cycling, it falls well short of cycle routing standards, and most seriously, is a route used by children going to and from school.

When it became clear the county highways department was not prepared to acknowledge the safety risks and signage confusion to cyclists using the river crossing, a formal complaint was lodged against the highway authority by CyclingUK.   A judgement independent of the county was requested. This was not accepted and the complaint  was passed between departments like a hot potato.  It remains unaddressed after many months.

The county recently stated it had no plans for a cycle route through-route for cycling across the river at this point.  It regards the carriageway as an acceptable alternative option – whatever the prevailing traffic and weather conditions.

What has now been erected are signs demonstrating  the profound disconnect between what the council highway  engineers’ perceive as sensible signage and the safety needs of cyclists and others.   Given the ‘in the face’ aggression behind the signage, and the insensitivity of its placement in this historically imortant castle location, it would seem not only has the advice of Cyclinguk and Sustrans been ignored, but also the guidance of CADW. tasked as it is with protecting the public against such official vandalism.

Conwy County Borough has some of the finest cycle routing in the country, and all credit should be extended to those officers and members who supported their development.

That said, there has  prevailed within this county a culture amplifying out of all proportion alleged incidents of minor discourtesy involving cyclists.  Although such incidents rarely lead to physical contact or injury, there are those minority of officers and members who grasp any opportunity to impose unnecessary restrictions. What is clear is that there is a vacuum between user organisations, and the local authorities, the latter having  a statutory duty to deliver a system of cycle routes, but unable to listen to the advice of the specialist voluntary sector.  That engagement is crucial to the success of the Active Travel legislation..  The indications thus far are not promising.

On the contrary, the messages coming out of Conwy CBC are not those of Welsh athlete and BBC pundit, Colin Jackson – Get On Your Bike!  but ‘Get Off Your Bike and Push it‘ 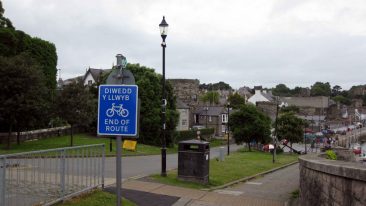 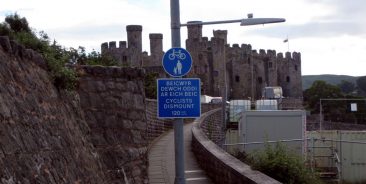