Dramatic Sychnant Pass – Only for the Brave or Foolhardy?

The Sychnant Pass in the North Wales county of Conwy is a much favoured destination for many cycle tourists and those living in the area.  Energetic cyclists relish its challenge despite its lack of designated space for walking or cycling at its dauntingly narrow road width at its summit.  But for this reason many everyday cyclists and walkers avoid using the road like the plague, in spite of its value as a direct link between the Conwy & Gwynedd coastal communities, and the inland settlements of the Conwy Valley.

Not least of all the area is popular with equestrians.  It seems there are around 200 riders and and 50 horses using the roads between the pass and the village of Tal y Cafn a short distance into the valley.   In a horrific incident in 2016 a horse died in a collision with a car on the pass.  Calls were made for the 60mph speed limit to be reduced. 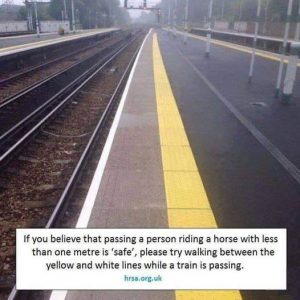 Against a background of numerous anecdotal reports of close encounters between motor vehicles and vulnerable users, a public meeting was held attended by Assembly Member Janet Finch-Saunders and a representative of the Conwy Highways Dept.  A consensus held that the limit should be reduced to 30mph. .

In the event the highway authority rejected this guidance.  It only reduced the limit to 40mph, substituting additional warning signage as the road narrows and bends at its woodland summit.  Conflicting deep shade and blinding low level sunshine during early morning and evening, is often a feature severely restricting visability for those travelling on the road.  This was clearly not a factor taken into account in the decision making process.

But what of active travel?  In 2013 Welsh Government enacted the Active Travel legislation.  On narrow roads such as this with no designated space for walkers, cyclists or horse riders, it is both wrong in principle, and in practice, to simply consider a speed limit in terms of a single vehicle travelling in one direction.  We should be looking at the aggregate speed of cars and lorries simultaineously passing from opposite directions.  The higher the speed the more severely they are likely to veer to the road-side space occupied by vulnerable traveller.  The constraining high walling and lack of grass verging at the Sychnant summit adds a particular hazard where it is currently permissable for drivers to pass at an aggregate speed of 80mph.   Is it any wonder that few travelling under their own steam are to be seen at the pass summit.  If Active Travel is to live up to its promise, a 20mph limit MUST be imposed at this location.

Overtaking Horses – and other Cyclists.

20mph for Vale of Glamorgan Villages