For finding new routes to go cycling there’s nothing better than a decent scale Ordnance Survey Map – 1inch to a mile in old money.

However if you want something a little simpler to be going on with until you find your pedalling legs, try our archived route pages.

Hi Roy.  Just thought I would drop you a line to thank you for producing a really good web site.We have been following your cycle way guides over the last three years and the descriptions and photos are spot on.We travel over to wales from Macclesfield.  We love the north wales coastal path,Caernarfon circular ride and the Mawdach trail,and will be back to cycle them in early august.We would like to try the circular round the Cadir Idris,but we are a little worried we might struggle with the gradient.  Is it tougher than the ride along the marine view to the Great Orme/? we have managed this before.  Anyway keep up the great work.  You have inspired us to cycle in north wales.  Thanks.

Hello there
My name is Josh and I just wanted to send a “thank you” to you for such a fantastic website.  I had never ridden in North Wales until last year and have become addicted to it ever since!  Your site has provided a huge source of inspiration and has become my “go to” website when route planning.    This one is a favourite of mine: http://www.cyclingnorthwales.co.uk/pages/rte_cwm_pen.htm
When it was pointed out that most of the routes were penned by my late colleague Maurice Clarke, Josh responded

It’s a pleasure – and superb to see the hand drawn maps with such loving route descriptions.  Really helps to bring the ride to life and capture the imagination!  Maurice has done a wonderful job and I am sorry to hear of his passing.

Excellent to hear that the site is proving so popular. I’ve pointed many friends in it’s direction!

I am currently in the process of moving house so the YouTube link you sent proving a welcome soundtrack to packing boxes!  I plan to reward myself with one of the routes near Prestatyn tomorrow or perhaps Anglesey as it is somewhere I know little about!  All the best.    P.S.  I have now “liked” your ‘Cycling Is Such Fun’ facebook page!

In response to the above Dave Woods former warden of Snowdon Ranger Youth Hostel on the 28th July 2017 wrote:- Just had a look at the email from Josh that you sent, then the link to Cwm Pennant and the mountain road to Prenteg route.  It reads that, unfortunately, you have to ride about a mile of the A487 – but you don’t need to.  The penultimate route direction says to turn left on the A487 after coming along the bike route from the Queens head.  Then stay on the A487 up the hill past Penmorfa.  However, instead, immediately after joining the A487, turn right up a small road past the primary school then past the hospital, you can then follow a track (not tarmacked, but easily ridden), on a lovely easy ascent which brings you out on the lane above Penmorfa, the one leading to Bryncir and Dolbenmaen.  I think the track was originally a quarry railway route, then the road to Llanllyfni en route to Caernarfon.   This trail, along a wooded (well spaced) hillside with good views, is so much better than riding up or down the A487.  I imagine that you must have ridden on it a few times.

In replying to Josh your editor wrote:-

Thank you Josh.
Your comment most generous.   Much of the routing work on the website to which you refer,and now archived, was undertaken by my late pal Maurice Clarke.
We have always been pleased by the site’s popularity – now around 2.6 million hits.  I have paid a short tribute to Maurice on my current site set up since his passing.
You will see there is a facebook button on the home page to ‘Cycling Is Such Fun’.
Thanks again for your kind thoughts – even a dog likes a pat on the head occasionally. 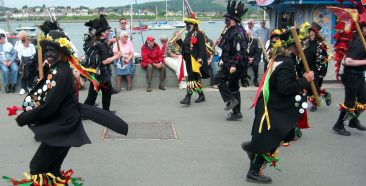