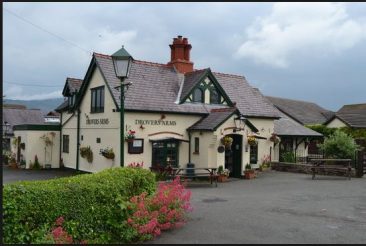 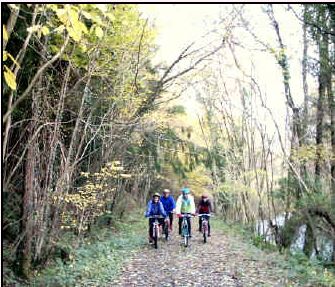 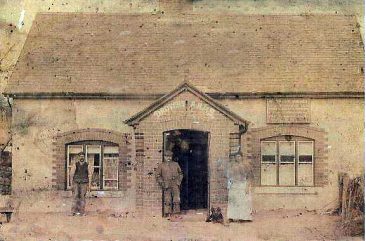 Twixt the small hamlet of Rhewl in the Vale of Clwyd and village of Bontuchel, tucked into the folds of the Denbigh Moors, lies a gorge scoured by the tumbling Afon Clywedog.

Alongside the river runs a footpath known to the chosen few as Lady Bagot’s Drive. For generations this has inspired cyclists from as far away as Merseyside and Cheshire to include it in their route for the day.

The ‘ Drive’ is of Edwardian provenance. It was laid as a carriageway by Lord Bagot for his wife at the time Clocaenog Forest was planted. The timber stock became heavily depleted during the Second World War. Intensive replanting after the ending of hostilities returned it to the dense forest we know now. There is a large stone monument on a hill in the forest to the memory of Lord Bagot,   . Known as the ‘Pennant Stone’ this also featured regularly on runs lists.

Some years ago a ‘No Cycling’ sign appeared at the Rhewl entrance to the Drive. This is of dubious legal status.   Whilst there is a pedestrian right of way along the entire length of the gorge, sections are in the private ownership of various parties.  It is not a designated cycleway, but as seen here the cycling provenance extends over almost a century.

Cycling and Lady Bagot have a long love affair. 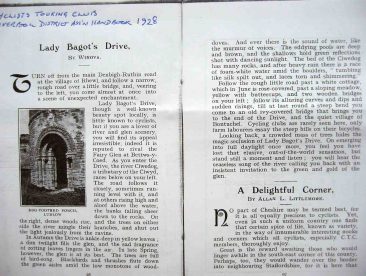 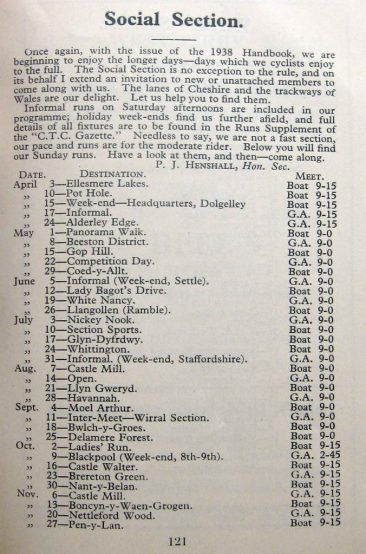 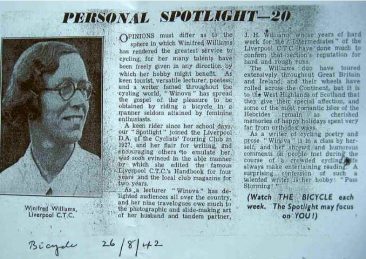 Cycling and Lady Bagot’s Drive goes back a long way. In 1929  a writer called ‘Challis’ wrote an article for the Liverpool District Association of the Cyclists Touring Club entitled, ‘In Pursuit of Primroses’ where…….

Two or three miles along the Denbigh Road I reached my destination. Lady Bagot’s Drive was the place…. As I passed over the bridge a man gave a curious smile, much to say ‘Poor chap he does not know where he is going. But I soon found out the reason for this for about 100 yds a further on I was up to the hubs in thick slush, while on each side of this were tremendous wheel tracks, about two feet deep, and so I had no choice but to pedal through………

I’m afraid Lady Bagot’s Drive descendants would not be pleased with my description – I don’t mean this one, but the remarks made on the spot; nor would the primrose plants have felt very grateful for the epithets ejected at them.

…… The ground had been churned up by the lumber wagons, and for at least half way along the drive the woodcutters had been felling trees, and I am afraid this spot has not quite the appeal ……With the parting glance at the dim lights of Ruthin in the valley, I continued the ride along the usual route home, congratulating myself on having been able to enjoy one of the best Sundays so far of 1929

About the same time Winifred Williams (renowned nationally by the pen name Winova) and also of the same CTC DA, wrote an article on ‘Punctures and Things’;again, reference to this exquisite locality.  She wrote:-

Club cyclists can sometimes recall a particular run that was noted for an epidemic of punctures, and one such comes to mind. I was leader for the day and was introducing the club to a favourite trip of mine in the Clwyd Valley, North Wales. The piece de resistance was a stretch of muddy track known as Lady Bagot’s Drive, and muddy or not, let me add that it has since become a popular run with Liverpool clubs.

It was an October day, crisp and clear, with the mountains rising out of a golden mist, and the bracken and dying leaves were russet and flame.

When we were ready to go after lunch somebody discovered a puncture. It was soon mended but from here to the next village, probably three miles, we had seven punctures (Autumn hedge trimming? – Ed.) After the first three I began to get desperate. Even now the afternoon was waning and evening shades were creeping into the sky. Every time we mounted again somebody from behind would shout ‘Puncture!’ I thought despairingly of Lady Bagot’s Drive but determined to get there today at all costs.

The last puncture mended (though we didn’t know it then), we continued on our way, and before long had entered Lady Bagot’s Drive which was inches deep in brown leaves and mud. By now the sun had gone………….. To see this place in spring or early summer, especially in morning sunshine is sheer enchantment……….

Past a white cottage, then the road followed closely the winding of the river, now low down and level with it; now rising high above the water. And so we emerged from fairy land to a main road, and climbed out of the village of Bontuchel. We had a last look back at the clustered hills made mysterious by the gathering dusk, and, down in the hollow a mass of trees that hid Lady Bagot’s Drive……….

Lady Bagot’s Drive and the Clocaenog Forest.  Featuring both local cyclists, and those from South Buckinghamshire CTC.    The halcyon days – pre-Lycra and helmet. 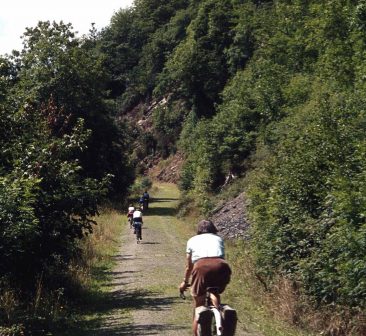 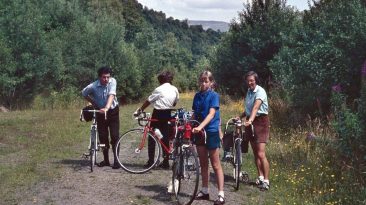 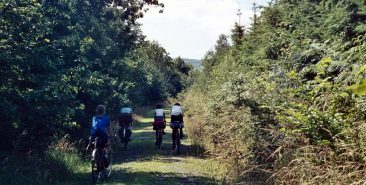 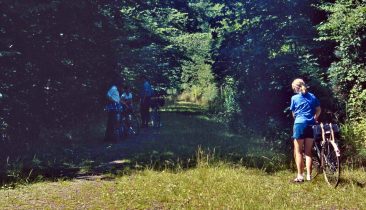 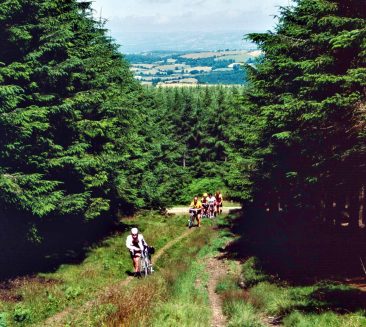 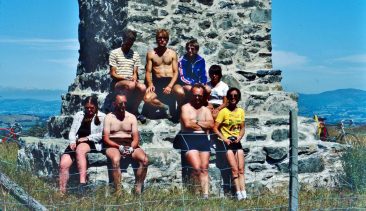 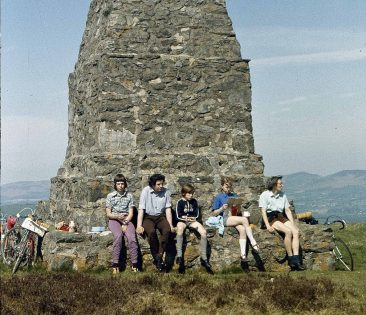 Much has changed in the world since the construction of Lady Bagot’s Drive.   Today there is much pressure on out of the way places such as this.   That said, this valley fits neatly into the sort of route envisaged in the groundbreaking Active Travel legislation.  Its designation as a cycleway should be high on the agenda of Denbighshire County Council.

Thanks to the late Wirral cyclinguk member Noel Blundell, for archive material.  Also member Ken Brown for his 1970s photos of the CTC Vale of Clwyd section.

Also acknowledgement of the photo of the Drover’s Arms from the Llanynys & Rhewl Community Council website, and particularly its source, Roger Lewis Jones.