In 1983 when I was eighteen years of age, my life changed in an instant. I was travelling on the back of my fiancé’s motorbike when a car smashed in to us head on. I was lucky. Sadly Andrew died. I was resuscitated at the scene and dragged out of a ditch with life changing injuries.  The incident took place on the ‘Abergele straight’ approaching Rhuddlan roundabout.

Four months in hospital, brachial plexus injury to my right arm (paralysed arm), broken femur pinned & plated, smashed up knee, skin & bone grafts, broken pelvis. But I was alive and determined to get on with life.

I learnt to walk again and adapted to life one handed, I married, had 2 children, worked full time and enjoyed life. I could do most things but sadly I realised that my injured knee would only bend to 90 degrees and wasn’t flexible enough to enable me to ride a bicycle again.  I was never a bike mad, lycra clad cyclist (did they even have lycra in the 80s?)  but I had an orange fold up shopper and loved to cycle through the Cheshire countryside and along the coast at Rhyl.

Over the years I tried and failed to find a bike that I could ride, I tried the exercise bike with the physio, tried a friend’s tricycle but couldn’t pedal properly on the right side and of course could only hold one handle bar. So I resigned myself to never cycling again.

When I turned 50 in 2015, my pain levels started to increase, osteoarthritis really started to kick in and my left leg and arm decided that after 32 years of carrying my right side, they were worn out!! I tried swimming, physio, a personal trainer and although everything helped, I was/am still on a slow decline.

In November 2017 daughter Alice suggested we join a local gym together and we discovered a static exercise bike that I could pedal! I was ecstatic, loving seeing the km wrack up (well 7km in 25 minutes!!), loving that I was cycling albeit not outside and not moving!! I started to wonder why it was that I could pedal that bike and if I could pedal a static bike, was there a real bike out there that I could ride?

So began over 12 months of researching what was out there. I realised that the exercise bike had forward pedals and that perhaps a trike might give me stability with one arm but could you get a forward pedalling trike? I learnt about different types of trike and was adamant that I did not want a recumbent, who wants to cycle in that strange low-down position and surely it isn’t safe?

I rang bike shops and was amazed at how unhelpful some were, we did a 200 mile trip to see a trike having prearranged a visit with a helpful person only to spend 10 minutes in the shop with a very unhelpful person – I couldn’t pedal it & they had no crank shorteners for the pedal. I spent a lot of time on the internet and found that forward pedalling bikes are very popular in the States and that there are some European accessible bike specialists who have agents with limited stock in the UK. I couldn’t make any real progress.

Then in December 2018 I realised that 6 miles down the road in Chester, there was a charity (Give it a Spin, Cycling UK affiliated) running inclusive cycling sessions twice a week. A chance to see some accessible bikes hopefully. One Monday I met some very nice people who showed me different types of bikes – trikes and tandems. Most were no good for me but I did get chance to cycle on a side by side tandem and albeit awkwardly & painfully I could just about pedal it & we did a lap of the park!! I didn’t want a side by side tandem but hope was renewed – perhaps I could again cycle outside!!

I intensified the research and was signposted by a friend whose daughter needs a trike to Quest 88 in Shrewsbury. We arranged a visit in May 2019 and were told that I could try all the bikes in the shop and they set aside 2 hours for the assessment. The very helpful staff weren’t phased by my requirements – can only use one arm, one leg shorter than the other with a knee that doesn’t bend properly. And oh is a bike we can get in the car possible because we will have to drive to decent cycle paths??!

Try this they said, bringing out a scary looking trike that was low down & didn’t have handlebars!! I didn’t like to complain and sat on the seat (which was comfy & more like a car seat), pedals were adjusted & a crank shortener added on the right. Go and have a ride they said (the shop is right next to the river path in Shrewsbury). I didn’t think this monster trike would get out of the doors but it did and I was off!! I could pedal it, I found very quickly that I could go fast and cycle like a normal person!! I left hubby Phil and the Quest staff standing and pedalled off sobbing I was so overwhelmed.

Folding ICE Trike for me.

Thirty six years of not being able to cycle independently outside, I was free and cycling like anyone else!! We could have tried other bikes in the shop but I was smitten and as the Ice Trike folds up and is actually quite petite, it was the one for me. 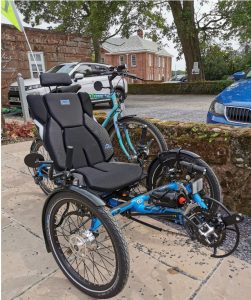 So after almost fainting at the cost (the price of a second hand car) and not VAT exempt as Ice Trikes are not made solely for disabled people, we put the order in. The trikes are hand made to order and personal specification (all gears and controls on the left for me) and take 6 weeks until they are ready.

Christmas came early when I collected the trike in early July and it is true to say that my life has been TRANSFORMED. I am out most weekends, exploring cycle paths and negotiating local roads and the cycle route network. I am able to walk less and less but I am able to cycle more and more and I feel NORMAL and I am keeping my knees and legs fit whilst minimising the strain on them – my orthopaedic consultant approves!!

We have cycled the Monsal Trail, the promenade at New Brighton (Meols to Seacombe), Willaston to Parkgate, Burton Marshes and getting to know local roads eg Whitby to Burton and Mollington to Ellesmere Port. And though I worried about the semi recumbent position I do feel safe, especially with hubby Phil cycling behind!

I am realising though that some cycling infrastructure is built for 2 wheel bikes, not 2 wheel trikes. I was really disappointed cycling from Chester to Sealand down the river that there are 2 A frame gates that we could only get through with Phil and one other lifting the trike over. Fine if we are cycling with others but not if it is just the 2 of us. I have also noticed fairly new cycling infrastructure in Ellesmere Port also had 2 gates that couldn’t be ridden through on a trike. But I’m trying not to complain as I am so glad to be out in the fresh air covering miles quickly!!

I have learnt that there is always hope and there is probably a bike to suit most people. Ok it took 36 years for me but now I’m making up for it. Mentally and physically – cycling is helping – fresh air, exercise, new places, new friends. Thank goodness for accessible cycling initiatives like Chester Give it A Spin, PEDAL AWAY and Quest 88 – you will never know what a difference you have made to me. And of course to Ice Trike for making a mainstream trike that I can ride!!

Sally’s story is truly inspirational, and perhaps a lesson for many who may feel that fate has not served them well.  But it is not right that she and others using adapted machines should be prevented from using routes by ‘A’ frames and unnecessary bollards etc.  We appreciate that in some instances they are installed to prevent access by cars.  But there should be a measured response to antisocial incursions, not a knee jerk reaction  causing more problems than it solves.