In the year 2002 Conwy County Borough launched a visionary plan to create a traffic-free cycling and walking trail alongside the River Conwy. Entitled the CONWY ESTUARY STRATEGIC ROUTE (CESR).

It included a trail running along the edge of the river past the the #RSPB Reserve, with a link to the north side of the A547 via a rail bridge and road underpass to both Conwy’s quayside and Llandudno’s West Shore In so doing it purported to provide a direct shared-use path between Conwy and Llandudno Junction.


From the initial public floating of the concept a number of challenges arose. Not least an impasse between the borough council and a department of Welsh Government late 2005; the latter raising an objection to the plain design of the rail bridge in this pristine estuary location. This was essential in linking #Glan Conwy into the scheme.

The Cyclists’ Touring Club (now branded CyclingUK) became involved in the public debate from the outset of the scheme, and played a major part in lobbying which led to the opposition to the the rail bridge being dropped.

In principle RSPB raised no objection to the trail running along its boundary, indeed it saw it as consistent with its green policies, however it was keen to ensure the security of the reserve and its facilities.


In anticipation that with the rail bridging in place, the link to Glan Conwy would only be a matter of time, the RSPB installed what was considered to be temporary gating on the path around its perimeter boundary to permit pedestrian access, but not cycling. . 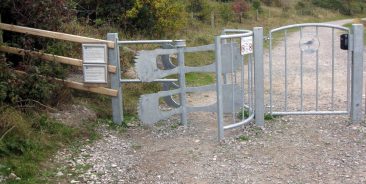 Dogs and Cycles of equal threat to wildlife?No objection was raised by CTC, believing this to be short term arrangement for this relatively short but important section of the original scheme. However as time dragged on it became clear that all was not well.

Whilst additional car parking was provided on the shore line outside the entrance to the Reserve no progress was made to complete the trail to Glan Conwy.

In September 2015 the Daily Post reported the RSPB had installed a locked gate on the path, charging £4 for access http://www.dailypost.co.uk/news/north-wales-news/walkers-charged-using-conwy-bird-10061195.

Not only did this restrict the pedestrian access enjoyed by the public for many years, but also ran in the face of the recently enacted Active Travel legislation.

The Wales Active Travel Act places a responsibility on local authorities to provide routes such as this to reduce dependency on cars, and at the same time encourage utility journeys by bike and on foot.

By bypassing the notorious Black Cat A55 roundabout, the Glan Conwy link would rate highly as both a commuting and safe route to schools, but also as a first step to developing further routing up the Conwy Valley.

Like all environmentally aware organisations, RSPB supports carbon reduction. But it should explain why it is discouraging walking and cycling, when it has set aside land to accommodate free parking for something like 200 cars.

RSPB claims it needs the income from the gate charge to meet its brief to serve the bird population. It is an organisation not without resources. Its net income (available for charity purposes) rose 6% to £90m in the last reported Financial Year (2013/14).

It is a worthy organisation for which the nation should feel rightly proud. But if it believes carbon reduction demands the highest priority, it should be looking to raise funding from the parking of cars on its reserve, not excluding and charging the cycling and walking community from accessing this pristine estuary location on its boundary – whether leased or not leased by the RSPB.

Around twenty years have elapsed since Conwy CBC proposed this trail with its magnificent and most important link to Llansanffraid Glan Conwy.     Never mind the excuses – when will it deliver?