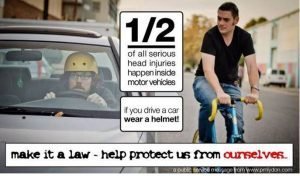 Much of our national conversation on transport is skewed by personal interest and perspectives, rather than the wider public benefit; that may in some cases be contrary to our perceived personal interests.

Land ownership and rights of public access is but one area of contentious debate.  Whilst for many generations foot access along paths through private land has been accepted as norm.  But the compelling case for cycle access is invariably strongly resisted in the belief that somehow cycling bestows upon the rider, by definition, uncomplimentary personality traits not found within other mortals.   Clearly nonsense.  But this underlies much of the opposition cycling faces, despite the governments Active Travel legislation, placing ever greater emphasis on cycling and walking.

In terms of convenience, distance potential, and luggage bearing capacity, the wheeled non-motor vehicle is at a distinct advantage in meeting the aims of the Active Travel legislation, but faces most irrational opposition.  Indeed only cycling has the capacity to challenge the use of the car over relatively short distances of up to ten miles and more, depending on the ability of the rider.  On the other hand, journeys of up to fifty miles return and more is not uncommon for daily commutes.

And furthermore there is growing evidence that those who travel on foot or cycle, are emotionally better equipped and more prepared for the daily tasks ahead.

Dr Mayer Hillman, has written much about helmets. See his BMJ text on Cycling and an earlier monograph on Helmets.

Emeritus Professor John Adams frequently, and for many years, has ruthlessly analysed stats on ‘so called’ safety benefits. Based on statistical evidence he has doggedly questioned the safety of seat belts..
http://www.john-adams.co.uk/

Professor John Whitelegg has worked with the first two notably on One False Step (free download iirc) and has set up World Transport Policy and Practice..
http://www.eco-logica.co.uk/worldtransport.html