Inspired by Channel 5’s TV series, ‘Walking Britain’s Lost Railways’ many will be considering what other lost rail lines can be restored and re-generated to meet the needs of a world that has changed so much since they were withdrawn from service.

In North Wales we have some excellent examples of redundant lines developed for walking and cycling.   There’s Lon Menai between Felinheli and Caernarfon, and Lon Ogwen forming a branch between Bangor and the very heart of Snowdonia.  In Denbighshire there’s the Prestatyn – Dyserth former tramway reaching out from the coastal National Cycle Route 5 providing access to the quiet lanes of the Vale of Clwyd.

But there are trackbeds still lying dormant which could be brought back into active usage.  Some are now in private ownership, others frustrated by lack of local government commitment, or self interest on the part of private individuals.

The failure to develop the former Vale of Clwyd line is a stark example, compounded by the political knifing in recent years by Denbighshire’s Planning Committee of a perfectly feasible active travel ‘starter’ route from Denbigh’s town centre to the town boundary at Brookhouse.The list of abandoned lines with the potential for development could go on and on,  but let us just look at one on Anglesey, the branch line between Llangefni and Amlwch.

This was opened in the summer of 1867 under the title of the Anglesey Central Railway.  From Gaerwen station on the main Holyhead line it extended to Llangefni in 1864.  From the outset funding to Amlwch was problematic with income less than planned for throughout and expenditure on infrastructure and rolling stock constrained by tight budgeting.  The line finally closed for passenger traffic in December 1964 following the Beeching Report. Thereafter the line found a healthy trade for around thirty years serving a motor relate chemical plant until it was deemed uneconomic in the face of competition from road transport in 1994, and the line closed down.
After ten years or more of inactivity the Isle of Anglesey company was formed with local authority backing aiming to reinstate the passenger service but was never able to acquire the necessary funds to make progress and in 2001 the county council terminated its involvement with the chemical plant it served, being demolished in 2003.
Since then the track has deteriorated, although reports indicate much of it is still accessible on foot.  At present it seems the ball is in the court of Anglesey Central Railway, a company formed to raise funds to lease the line from Network Rail.  In 2008 the charity Sustrans expressed an interest in developing it as an active travel route for walking and cycling,, but thus far the weight of political thinking has favoured rail development, but seemingly with no breakthrough in the foreseeable future, despite the dedicated input of a band of railway enthusiasts.
The public interest is now entitled to ask ‘Has the time come to consider alternative’s to rail travel along this route, particularly since the enactment of the Wales Active Travel legislation placing a responsibility on local authorities to develop routes for cycling and walking for everyday journeys. 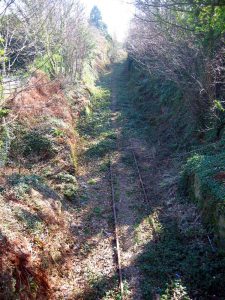 There’s a simple compromise with the railway people: let’s clear the route and put a cycleable surface on it, on the understanding that they retain priority if they can ever get the cash together to restore it to railway use. (Much of the route, if not all, could have a train line with a cycle route beside it.)

A considered review of the position to date:-

Based on information available the land appears to be owned by Network Rail (not by Anglesey Central Railway Ltd).  The ACRL, again appears to have a la licence to clear vegetation from the track bed.  There is much doubt that Llein Amlwch will ever become a sustainable (commercially successful) heritage railway.  It does not have the charm (pulling power) of the Ffestiniog and Welsh Highland (narrow gauge) railways.  So, it would seem, Network Rail and its license holders (ACR) are sitting on a disused and deteriorating asset – some might call it a liability.
The track would probably have to be relaid in order for passenger trains to run again (rotten sleepers). 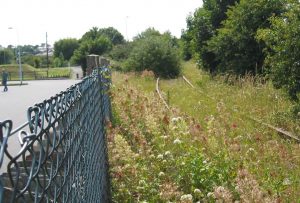 And who knows what the cost of repairs to bridges, culverts and embankments would be.  Stations would need to be financed, designed, constructed and maintained.  That said, nothing is likely to happen until Ynys Mon Council take a realistic and pro-active interest in the conversion of this disused railway into a traffic free trail for non-motorised users.

There are several heritage railways operating in North Wales (Llangollen, Ffestiniog, Welsh Highland etc) and, despite the apparent lack of progress by ACRL, their determination and desire to deliver of their vision deserves credit and should be acknowledged.  The broader public interest however might be best served if all parties might be persuaded to work together in partnership, in order to secure government assistance to deliver a solution, sharing at least in part,if not the whole, the genuinely sustainable Sustrans vision.

Daily Post Oct 2019 The line has been closed for 20yrs.  Walkers and cyclists now want a say.