The Active Travel Act design guidance for this situation reads:

6.28.1 Uncontrolled cycle track crossings at side roads should, wherever safe and practicable, give priority to cyclists crossing the side road. Crossings that give cyclists priority over vehicles on the side road will allow cyclists to continue without loss of momentum and present a strong promotional message about how non-motorised users are valued along a corridor. Design Element DE025 is available for this purpose.

Dangerous cycle infrastructure is to be found widely.  It is often not perceived as such by highway authorities and oddly, the cycling public alike.   Injury statistics will be grossly under recorded, and likely appear as accidents for which victims are largely responsible.   In truth the fault lies with designers that pay little regard to normal patterns of behaviour and cognitive responses to a whole range of route characteristics

This example may be seen on National Cycle Route 8 between Felinheli and Caernarfon where the off road cycle path crosses the entrance to the Llanfair Hall estate.  If designers set out to design a path that presented maximum danger to cyclists at this location, this is how they would do it. 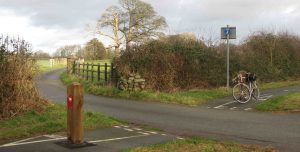 Let us focus on the crossing point.  Priority of passage is given to traffic entering and leaving the Llanfair estate by means of a 2m wide corrider from the boundary hedge to the kerbside. Cyclists are expected to dismount and walk three or four paces to join the path beyond, in so doing allowing priority of passage to Llanfair Hall traffic, contrary to AT design guidelines above. This may be compared with expecting pedestrians and cyclists on a road side shared use path to halt at every residential driveway on an average suburban road; clearly a nonsense.

In this case the cycle path runs parallel to the road to within  circa 50m of the Plas Llanfair Hall entrance where it curves away from the road towards boundary hedge.  At this point sight lines are severely restricted and a cyclist or pedestrian would need to enter the crossing to check for any Llanfair traffic leaving the property.  In the event of litigation arising from a collision, the pedestrian or cyclist would be placed in a perversely unfair position when the primary burden of care  and liability should rest with the Llanfair Hall motor  traffic, not with the cycle lane users

Bollards are invariable installed to deny motor access and rat running by drivers, even though there is often no supportive evidence of justification or need.  In this location the latter applies.  It appears to  be a deterrent for cyclists wavering from a straight line approaching this crossing,. Any impact with a solid structure and fall to the ground risks life changing consequences; this applies to all modes, particularly cyclist.  Great care should be exercised before considering solid structures within the borders of a cycle path..  Their presence can be overlooked or sight lines  obstructed by the presence of other path users.

A bicycle is a high sided vehicle.  As such it is vulnerable to turbulent weather conditions, such as are experienced in westerly coastal areas. Path widths need to be sufficient to accommodate sudden wind induced deflections and corrections.  In this case only 30 inches have been allowed each side of the bollards.  Quite inadequate for correcting a deflection.


Crossing point to be re-aligned mid-way between the roadway and the boundary hedge to provide clear sight lines in all directions.

Priority of passage for cyclists, pedestrians and the disabled (NMUs).

One benefit from the Caernarfon bypass has been the negotiation initiated by CyclingUK for this hazardous side- road crossing at Plas Llanfair Hall on Lon Menai to be re engineered using facilities &equipment from the nearby bypass. 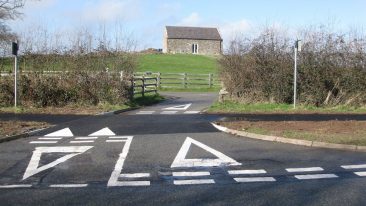 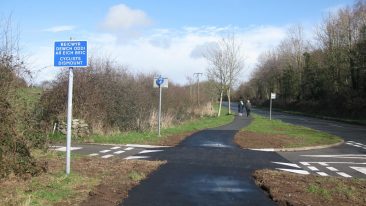 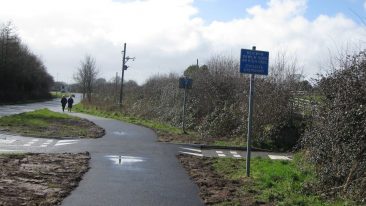 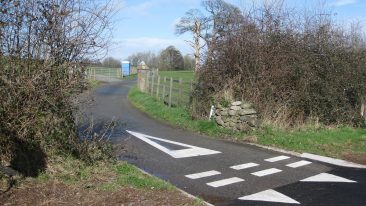 One glaring fault. The DISMOUNT signs.

Not one rider in a hundred is likely to dismount to negotiate this three metre wide strip of tarmac. To suggest otherwise runs counter to predictive rider behaviour and traffic flow at this location. Many cyclists ride in pairs or groups. For one of them to suddenly come to a halt would likely cause a pile-up with resulting risk of damage to bikes and/or persons with the Highway Authority exposed to litigation.

Simple Solution.   DISMOUNT signs to be removed and replaced with CAUTION signage enabling riders to maintain motion whilst at the same time being advised to exercise additional care.  Such an example is to be seen below:-

Smooth steady motion – why cyclists are reluctant to stop.

Video of Victoria Dock, scene of the above