Lon Clwyd, Denbighshire – a sleeping vision waiting to be stirred?

In 1999 there was a visionary proposal to convert the former Vale of Clwyd Rail Line into an eighteen mile country trail for walking and cycling between Rhyl and Ruthin.  Some sections had previously been developed but much remained.  A Feasibility Study was conducted by Richard Braun and Associates of Colwyn Bay on behalf of Denbighshire County Council.  It was opposed en bloc by landed interests including the National Farmers Union, The Farmers Union of Wales and the Country Landowners Association.  Privately some county councillors expressed a desire to move forward with the project but felt unable to vote in support in the face of the incessantly powerful lobbying.   A group supporting the project sought to support the move and two well organised demonstration rides were organised, to no avail.

Let us revisit that vision again. Part of the original concept has been delivered with direct cycle routing inland as far as St Asaph. The passage of twenty years has made it all the more relevant that the remainder be revisited. 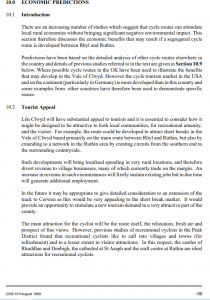