Cyclists and walkers gathered to protest.

Despite the heavily overcast weather conditions over much of #Snowdonia (perhaps appropriate for Halloween) , a large and high spirited gathering of cyclists and walkers were out in strength on the #Mawddach estuary today at Barmouth.

They were protesting at the proposal to deny access to the rail bridge for those travelling across the estuary under their own steam.

The right of passage has existed since 1867, albeit for most of this time by payment of a small toll until recent times.

Widely regarded as one of the truly outstanding coastal settings in the UK, the rail bridge with its access for walking and cycling must surely be one most valued and photographed.

The Protest Ride was oganised by Sustrans , with a strong contingent of other interested groups, notably CTC in support.    The massed participation provided compelling evidence that any decision on the future of the bridge must take account of its importance not only for tourism, but also for the cultural and business life of the residential settlements in the area.

This is yet another early test as to whether Welsh government is seriously committed to its own Active Travel legislation. It places a responsibility and duty on local authorities to provide continuous routes for cycling and walking. In this instance the local authority is not being asked to construct a route of exceptional quality – only to maintain what already exists. It is a Grade 2 listed structure.

Opened in 1867, the history of the Barmouth Bridge, or Viaduct as it is sometimes called, can be seen on Wikipedia – this includes a commentary on why this much loved section of the thirteen thousand miles of the National Cycle Network is under such threat at this time.https://en.wikipedia.org/wiki/Barmouth_Bridge

You too can still protest>>>

You can still add your own name to the protest petition at:-

What the Press has to say>>

And see the video of the Ride at >>>>https://www.youtube.com/watch?v=iV1Ra2zz6MI

Music:-  Vaughan Williams’s ‘Whither Shall I Wander?’ 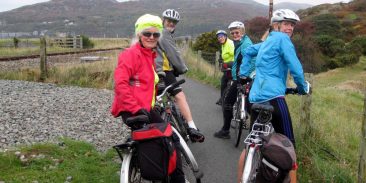 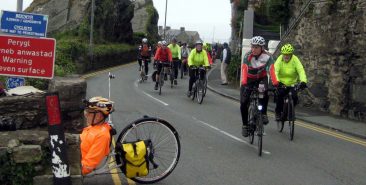