The above ‘Active Travel’ shared use route (BLUE) has recently been completed (August 2020).  The potential AT route with significant potential (GREEN) has a history..

In 2015 Denbighshire Planning Committee rejected this in-house proposal for an Active Travel Route from Denbigh Town Centre to the perimeter of the town at Brookhouse. The application was hamstrung by the resistance by the High School management to the route passing over school grounds of what was formerly the trackbed of the now defunct Vale of Clwyd Railway.  This was closed in 1968 under the Beeching cuts .

Had this route been supported by the planning committee it might well have been amongst the first routes to be developed under the Welsh Active Travel legislation.  It lost on a vote of 14 to 9, with some members seemingly confused as to the conceptual content and parameters behind the legislation.    The decision to reject was widely criticised by cycling interests including Sustrans and CyclingUK.  It would have provided the springboard for developing routes beyond the town boundary

Apart from directional and design difficulties arising from the need to circumvent school land, a small number of residents also lodged objections on social grounds  although their land curtiledge rights were not directly affected. For the purpose of the debate the Chair of the planning committee stood down from his position to propose the motion to reject.  As ward member for the main body of the objectors numbering around twenty, he urged officers to return to the drawing board to explore routing elsewhere. 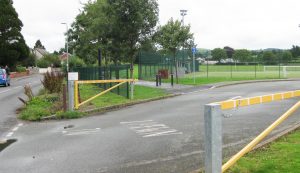 Despite assurances that a fresh proposal would appear within months, five years have now elapsed with a radically truncated version of the original plan,the school having  dropped its opposition to routing across its land.  A fenced shared- use path has been laid around the edge of the school grounds, terminating at the school buildings within a lockable school boundary gate. (see left)  Of value for accessing the school during operating times, but of  little value for the general public other than for journeys to and from properties adjacent to Ystrad Road via an intermediate access opening .

In its Active Travel plans for town centres published on the 25th August 2020 (see below)  Denbighshire CC stated of Denbigh:-

Quote:-  (paraphrased)  ‘The original proposals for Denbigh included a one-way system on Vale Street, High Street and Bridge Street; improved areas for pedestrians and cyclists……. the closure to vehicles of the northern side of High Street.and a temporary 20mph speed limits would have been introduced on some town roads………. The plans were refused due to concerns raised by business owners and residents about the scale of the proposals………go back to the drawing board and consider whether there are alternative options for Denbigh to help facilitate social distancing whilst encouraging walking and cycling’………..  will draw up new proposals for Denbigh and will be engaging with the local community in due course. 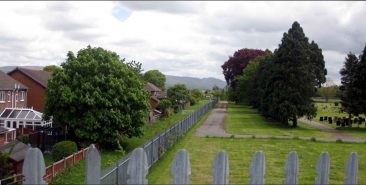 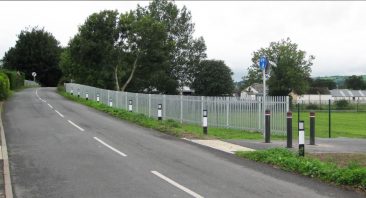 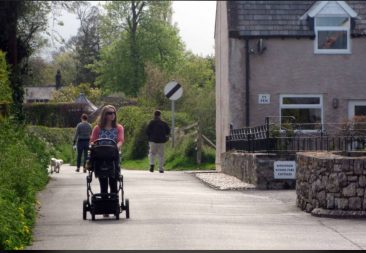 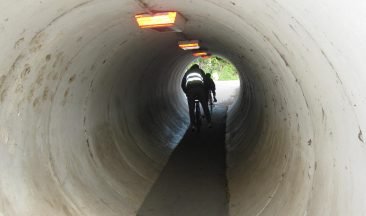 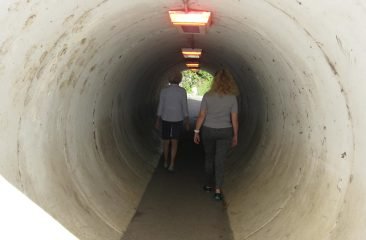 Based upon the 2015 route proposal, the above illustrations demonstrate features of the way forward in breaking the deadlock in which Denbigh finds itself.  The town is pivotal to developing a strategic AT network.  Currently the popular and well used AT coastal routes are stalled at St Asaph with no apparent plan to bridge the gap to Denbigh.  Similarly the Covid emergency has demonstrated a strong latent  Active Travel demand between Denbigh and Henllan  with a need for safe provision in that direction.   So it is for the other settlements sweeping to the South to Ruthin and beyond.

But instead of operating as a vibrant hub for sustainable and environmentally sensitive travel within the Clwyd valley, Denbigh’s need and potential is being suppressed.   This may in part be due to an overly strict interpretation of the term ‘local journeys’, encouraging micro thinking and micro delivery in terms of  of infrastructure and design, that only makes sense if you happen to be pushing a wheelbarrow.  Rather than assisting commuting cyclists to undertake journeys by bike, it undermines any incentive to pedal rather than drive.

Freeing up the school land for routing has changed the picture entirely.  It has disposed of the major obstacle to the 2015 proposal.  It now leaves the way clear to deliver the original route from Denbigh town centre to  Brookhouse and beyond. This was supported by county officers at the time and backed by a positive feasibility study that remains unchallenged.

It is clear from the statement of the 25th August (above)that the county has run out of ideas.  However it does invite consideration of ‘ alternative options to encourage walking and cycling‘.  Denbigh has waited far too long to meet its responsibilities to deliver Active Travel.   In the interests of all…… residents,town centre traders and visitors alike, it must bring to an end the five years of prevarication and return to the Brookhouse option.  ‘We must move further much faster’- Sustrans

VIdeo- Denbigh Town Comes Alive to the Tour Of Britain 2016