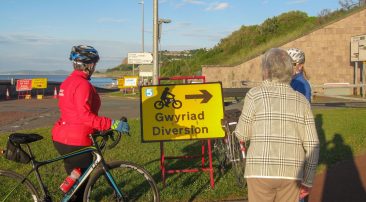 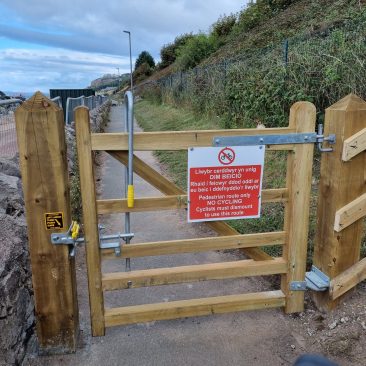 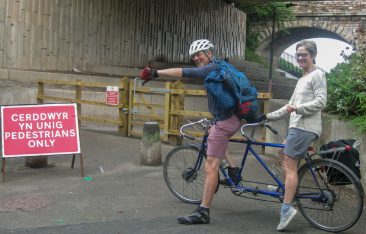 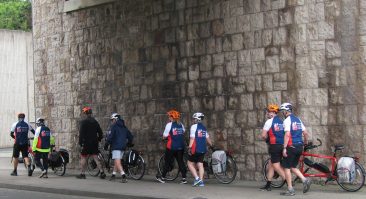 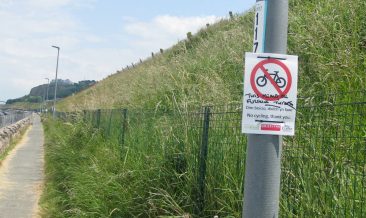 Currently major reconstruction work is being undertaken on the seafront of Old Colwyn in the County Borough of Conwy.  This involves the temporary diversion of National Cycle Route 5 that formerly ran along the promenade.  This is a most important section of the National Cycle Network used by international cyclists, local leisure riders and hospitality and public service workers 24hrs a day in all weather conditions.

For reasons lacking transparency a partnership of the highway authority, contractor’s Griffiths Engineering and charity Sustrans has deemed that an off-road path at the base of the main line rail banking, and parallel to the highway, was unsuitable for the shared use of pedestrians and cyclists.  Signage to this effect was erected ordering any riders wishing to use the path to dismount and push their machines on foot for circa 1mile.

Simultaneously cycle route diversion signage was installed directing cyclists of whatever ability or experience, to use a signposted route unsuitable for other than the most experienced riders, familiar with the locality, and prepared to take the risks entailed in close contact with fast moving motor traffic, particularly through the multi-laned A55 expressway interchange and Abergele Road.

In these respects, the complainant alleges Conwy County Borough Council, as the public body directly answerable to the public, has failed to exercise due diligence by endorsing, and failing to restrain, cycle routing measures by contractor Griffiths that discriminates against cycling.  No account has been taken of the vulnerabilities of cyclists in general, not least those with limited physical and cognitive capacities who form a significant proportion of the cycling community, and for whom the action of pedalling and its cardiovascular and psychological benefits, are an essential element in their achieving socially inclusive lifestyles.

Such has been legislated upon in the Active Travel Act (Wales) 2014 in which there is no more important travel mode than cycling.   And in respect of those citizens needing extra protection against discrimination, the Equality Act 2010.  As these were clearly not considered in the provision for cycling in this instance, the complainant sought the following information.

Please forward any Risk Assessment that has presumably been undertaken before the decision was taken to divert cyclists through the hazardous A55 Expressway traffic interchange during the current term of coastal protection work.  It would be expected that any assessment would take account of those cycle users of exceptional vulnerability, such as children, the elderly, and those defined in the Equality legislation.

Also, would you kindly forward details of any reported cyclist related incidents involving collision and/or injury on the promenade between Old Colwyn and Penrhyn Bay during the past five years.

The authority has received a Method Statement, Risk Assessment and Construction Phase Plan detailing the vehicle, pedestrian, and cyclist diversion routes necessary to be implemented I order to safely execute the coastal defence work at Old Colwyn.

‘Edit’ – no evidence of cycling related incidents during the previous five years was forthcoming. The ‘CDM’ (Construction, Design & Management) referred to above is defined as ‘to reduce dangers to employees and members of the public by designing out hazards and ensuring that construction projects are managed appropriately’.

It is the complainant’s contention that in respect of both the rail path and alternative cycle route diversion, the interests of cyclists have been seriously  undervalued and misunderstood, to the extent that many are being placed in peril using the diversion, and face unjustified harassment on the rail path.   All directly consequential upon the failure of Conwy CBC to exercise critical oversight of the Griffiths CDM on behalf of the cycling public.

Instead of designing in the safety and legitimate needs of cycling as performed by most riders, the actions taken appear predicated on the notion that cycling is a mode of transport presenting a definable threat to others, and consequently to be diverted or excluded from the railway path, situated as it is on the compelling and direct ‘journey desire line’, used by leisure  and commuting cyclists for many years.

This path has wrongly been assumed to be too narrow for shared use at 1.2mtrs.  Additionally, it has a grass verge and several wider passing points.   There are other examples known to the writer of similarly narrow shared-use ways that equally serve a valuable public service, and function without recorded conflict.  One example is the Penmaenbach headland.  Here the shared-use path is also 1.2mtrs wide without the advantage of a green verge.  Literally thousands of pedestrians and cyclists use this annually, simply by treating the needs of the other with courtesy and equanimity.  There are many such narrow trail sections countrywide, without which cycle routing continuity and connectivity could not be achieved.

On the 18th January 2022  the complainant  emailed the CCBC Director of Highways expressing dissatisfaction with the content of the FOI response, pointing out that on a matter of highway safety the interface for the expressing of concerns, and receiving information, responsibility should rest with the highway authority, not a contractor intermediary, in this instance Griffiths Engineering.   At the same time the writer warned of possible corporate liability exposure in the event of injury or death to a cyclist using the not fit for purpose diversion, and an assurance that the writer was not concerned only with cyclists, but also the local government staff and partners involved in this indefensible discrimination against the cycling public.     This email remains unacknowledged.

As both a lifetime cyclist and pedestrian, and much closer to ninety years of age than eighty, the complainant has been familiar with this locality for thirty years and more.  In so being he has observed with immense satisfaction the growth of both commuting and leisure cycle journeys along the North Wales coast during this time.

Upon the designation of the route as a section of the National Cycle Network he started a Wednesday ‘Softy Cycling’ group between Colwyn Bay pier and Pensarn.

In the early days it saw social workers accompanying clients as part of their social training programmes and won UK citations for both the Softies group, and Conwy CBC; the latter for its publicity support.  The complainant was privileged to be present to receive the citations in Manchester from its Lord Mayor, and for some years the council’s citation hung in the vestibule of the former Llanfairfechan council offices.

Throughout its thirty years stormy weather conditions never deterred the group, and when necessary, the rail path was used to avoid on-shore high waves.  It was also used by both pedestrians and cyclists in percolating down to the promenade from the residential areas above.   Since the start of the current coast protection work and cycle diversion arrangements were made, there has been a radical decline in cross county cycling to which the intimidating atmosphere created by the diversion and pedalling ban must bear a heavy responsibility.  Both the diversion and rail path have become hostile environments for cycling

To gain a pedestrian perspective, the writer has visited the diversion and rail path on over a dozen occasions; each of two-hour duration.  He has sought the views of pedestrians and cyclists alike, with some recorded to video.  Although lightly populated, cyclists were much in evidence walking or riding the rail path – and continue to do so since the August bank holiday weekend when heavy annotated ‘No Cycling’ gates were erected at each end.   Virtually all the cyclists reported feeling intimidated by the assertive and sometimes physically threatening responses of a minority of pedestrians, the official signage presented as justification for their behaviour.

The responses of this minority of pedestrians, contrasted markedly with the writer’s own experience as a pedestrian navigating space with passing cyclists.  The rail path is level for its entire length with clear sight lines.  The approach of cyclists is clear to see at distance with every opportunity to prepare for passing.

Although cyclists were encountered frequently and represented around 50% of the users, from a pedestrian perspective at no time was there any act of discourtesy, nor was there risk of physical contact.  On the contrary, riders slowed and negotiated available space with care.  As and when necessary the complainant stepped to one side to allow the rider(s) to proceed unhindered with a word of thanks in return; there is an adequate grass verge to facilitate this.

This scenario was observed with other pedestrians and cyclists involved with the same outcome, apart from two occasions where pedestrians resisted the passage of riders.  One male with a large dog with muzzle removed thrust a stick through a young riders front wheel, and in a second incident a muscular and incoherent woman, aware of a cyclist behind, held her position central to the path with arms flailing sidewards.   From a pedestrian perspective quite unnecessary and ludicrous to observe.

There is much evidence that when pedestrians and cyclists share space in crowded places where ‘critical mass’ occurs, cyclists will slow, or place a foot to the ground, or walk, and not proceed further in the saddle until the way is clear and there is no risk to themselves or others. In any collision cyclists gain no benefit and risk more serious injury to themselves.

As this complaint bears directly on the delivery of the Welsh government’s Active Travel Policy, where debatably cycling is the major component as an alternative to car travel, the complainant requests that responses to the following be made public.

Release the specific grounds upon which the council endorsed contractor Griffiths’ opposition on safety grounds, to cycle riding on the rail path.

Similarly, make public details of how it considers the cycle route diversion established by the contractor to be safe and negotiable whilst riding a cycle.

In respect of both questions, it would be expected that due regard would have been made to the wide spectrum of people cycling, ranging from the most athletic, to the elderly, and young families with children riding their own bikes, to those with special physical and mental needs requiring supervision and support.  Some of the latter ride specially adapted cycles, such as recumbents, or tricycles for balance.

In all parts of society there are those that act, deliberately or without intent, beyond social courtesy norms.  Driving, cycling,  and walking, with and without a dog, are no exceptions.  That should not mean that the majority of drivers, cyclists or pedestrians should be penalized for the conduct of the few.  But that is exactly what has happening here. Cyclists are not only being denied safe passage along the rail path without just cause, but perversely, by definition, are being deceived into believing it is safe to ride on the diversion, when clearly it is not.

Finally, there is good reason to believe that some cyclists for compelling time saving, social or business reasons, will continue to ride on the rail path without inconveniencing others.  It is important that they should know what sanctions they risk in doing so.  The complainant requests clarity on what sanctions will apply.  Which body will apply them.  And on what evidence based public interest grounds would sanctions be imposed?