ENTER for the updated Introduction. 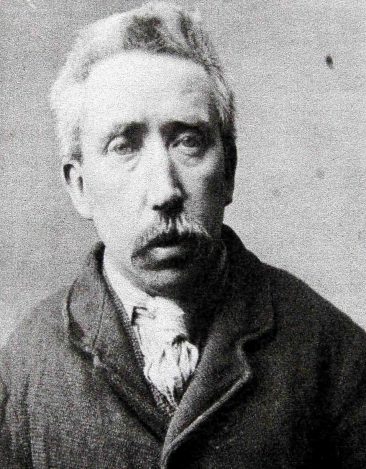 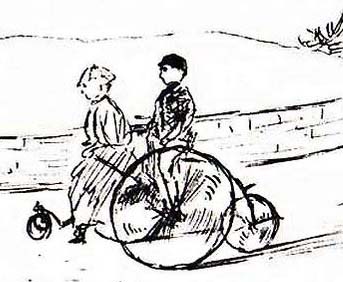 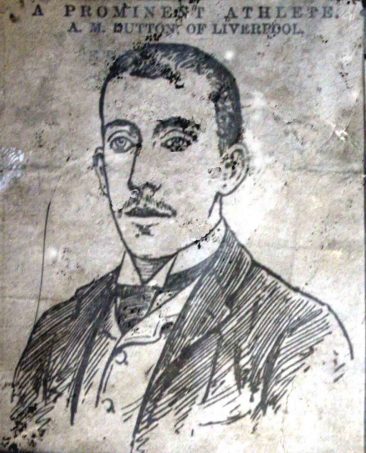 In 1887 Walter H Dutton was a 25 year old bachelor living at 13, Sandstone Road in the West Derby area of Liverpool. He and his 21 year old sister, Amy, his 23 year old brother, Arthur, and his 16 year old brother, Tom were all keen cyclists. Amy, Tom and possibly Arthur lived with Walter, their elder brother.

Walt had a certain artistic ability (the 1891 census identifies him as a book-keeper and artist in oil and water colour) and in March 1887, when he acquired a new tricycle tandem and the latest safety bicycle, he decided to keep a sketchbook diary of the cycling activities of himself, family and friends. This section contains all the sketches (well over 200) contained in Walt’s 1887 diary.

These sketches with their pithy, hand-written captions and wry humour provide a fascinating and entertaining insight to the cycling world of 120 years ago. There were no helmets and lycra, but tails and bowler hats were sometimes worn. The roads were frequently un-metalled and so were often muddy or dusty or ‘loose’, and route finding could be a problem. Aggressive dogs were even more  a danger then than now, especially to the vulnerable riders of ordinaries, and they were robustly repelled with whip, boot and wheel. It was a time when cyclists were joining together to form clubs, and in April Walter and his friends inaugurated the Wirral B C, though they also rode on occasion with the Anfield and Liverpool clubs. 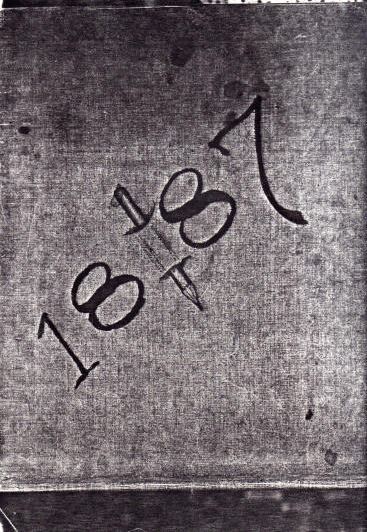 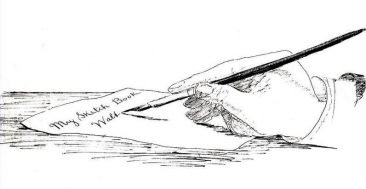 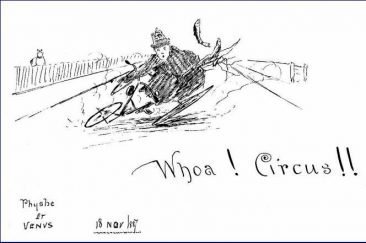 It is therefore sad to learn that, just 20 years after the happy days of 1887, Walt was admitted to Lancaster Lunatic Asylum, where he died tragically two years later.

Discovery of the sketchbook.

In the 1950s Eddie Pearce, a Hoylake butcher and member of the Birkenhead North End Cycling Club, bought the sketchbook from a second hand shop. It remains a mystery how it came to be there, or where it is now. It is possible it remains with the descendants of Eddie. Our inquiries are inconclusive. However, shortly after acquiring it Eddie Pearce loaned it to an Alan Johnston who took photocopies. For many years he thought little about them until the sketchbook’s potential wider interest occurred to him as he unpacked after he had moved to live in Spain. We are very grateful to Alan for contacting us and enabling us to share with you this unique record of the simple pleasures of cycling in a bygone age.

Almost forty names are mentioned in the pages of the sketchbook; we expect these to attract the interest of family history buffs. We would be most interested to hear of any surviving cycling-related accounts or photographs of that time, not least of Walt himself, of whom we know precious little apart from this sublime year in his life.

We do know, however, from an entry in the CTC Gazette for September 1939, that his brother Arthur, who figures a lot in the Sketchbook, went on to become a well-known veteran cyclist, as indeed did Lawrence Fletcher, another member of the Duttons’ circle of friends and who had been one of the pioneer founders of CTC (see his obituary, June 1933 in the CTC Gazette and a fascinating illustrated article about him written by David Birchall, Anfield Bicycle Club archivist, and published in The Boneshaker magazine).

A site visitor who is a descendant of ‘Good Old Billy’ Slade and his son, W J Slade, has provided us with some fascinating family history.

Page 3: Training for Our Tour