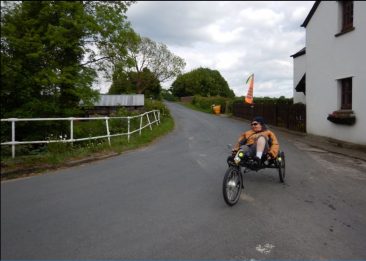 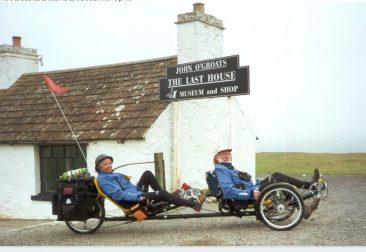 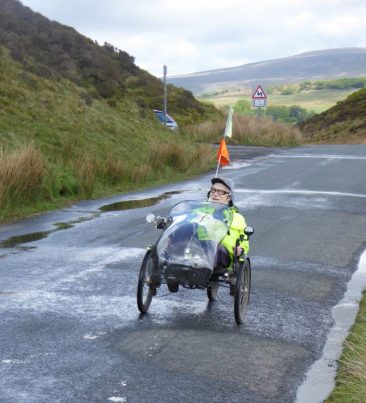 Now into their seventies, Matt Hodges agrees he and his wife Mary are oddities- even among cyclists.  He also agrees about the dangers of tribalism, but he’s not sure about those who believe in having a different bike for every purpose.  Mind you, he does have  a number of bikes, each with it’s own computer, and looking at his annual mileage finds nearly all is on the same bike; which just happens to be the one in favour at any given time. The others seldom get a look in.

At present he is in a very small tribe, considered mad by most cyclists. He’s riding a recumbent trike for almost 90% of this year’s distance (2017).   It takes the weight off his arthritic hands and is very comfortable and stable in bad winds. It’s a bit slow as it is heavy, the only real disadvantage being that he can’t filter through traffic jams unless there’s a decent cycle lane. He has to queue with the cars.
A member of the Lancaster CTC Section for many years, he finds he  can’t ride it with that tribe as the speed pattern is very different, and also he’s afraid of colliding with other riders as they don’t look down at ankle level where his front wheels stick out. Previously almost all his leisure riding and all his touring was on a tandem (another odd tribe) with his wife Mary.

End to End plus

But when it comes to real odd balls, can you beat this he asks. He and Mary haven’t ridden it in the streets of London,  but they did ride on Princes Street in Edinburgh on our way home from their Land’s End to John O’Groats 17 years ago.
In the year 2000 he and Mary bought their Greenspeed  through Rob Hague at Westcountry Recumbents     He had been interested in recumbents for some time, but hadn’t taken the plunge because we rode with the CTC and could see they couldn’t ride the recumbent in a group. Then in 1999 Matt had a heart attack and decided riding with his CTC group was no longer an option so the Greenspeed was ordered.
Barely recovered from his heart attack he and Mary decided to do the ‘End to End’.  They couldn’t take their recumbent on the train, so rode from Lancaster to Land’s End to start off.   And then after completing their ride to John O’Groats set off to ride back to Lancaster and home. In all there were on the road for about 49 days, with a few weeks at home in the middle. They didn’t take a direct route but went via the Lizard to get the southern most part of the mainland and also via Skye and Cape Wrath returning via Glen Shea and Edinburgh.

Mix and match with their CTC section

Since then they have used their Greenspeed on and off.  But also managed to ride their ordinary tandem with their CTC section. At present it is laid up as Mary has had both hips replaced and can’t manage long rides. She is riding locally on a Hase Kettwiesel with electric-assist while Matt is doing most of his riding on an ICE Adventure, although he admits he’s slowing down a lot and can’t manage much over 50 miles now.  They bought their later machines through Edinburgh’s  Laid Back Bikes.
In considering the future, Matt thinks the next move will be to a recumbent trike with electric assist to help him up the hills.  Mary has gone that way already and finds it gets consideration from most drivers. They seem to confuse it with the hand-cycles they have seen on the tele in the para-olympics. It’s much faster than a mobility scooter, but she hasn’t tried riding it round Sainsbury’s yet!      Matt is sure that most recumbent riders will confirm the snag is the attention it attracts. You can’t go anywhere he says without being noticed.  People want to talk about it; it’s probably the high point of many folks days- and that delays you riding the thing!.

Matt and Mary are no strangers to Wales too..  Here’s warm memories of your editor meeting up with them some years ago>>> 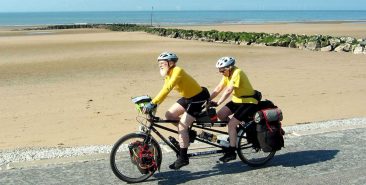 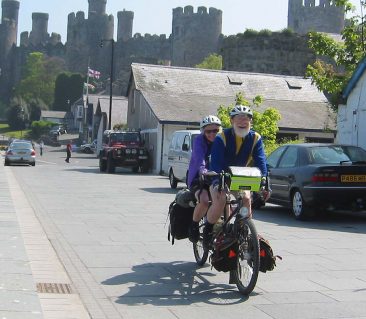 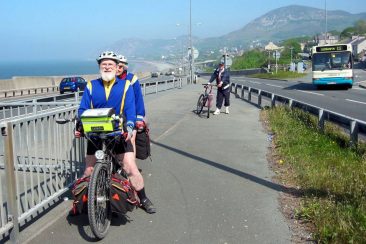