Heinz Stücke – A Man and His Bike.

Many years ago, more than I care to recall, there was a BBC radio programme entitled ‘In Town Tonight’. This featured interviews with interesting people passing through London. I learned more about people and places from that programme than from all my geography books put together.

I am often reminded of this when I encounter cyclists heading along the North Wales stretch of the National Cycle Network where I live. Whether it be eager young students from this country and abroad, or older and wiser folk rediscovering the pleasures of self-propulsion on two wheels, I am always the wiser for listening to their experiences.

But I will never again meet a traveller the like of which I encountered in  2006  rounding Penmaenbach headland between Conwy and Penmaenbach. Heinz Stucke approached from the Bangor direction. His silhouette in the bright summer sunshine conveyed immediately he was no ordinary cyclist. For starters his bicycle had two sets of handlebars – one above the other. And his front and rear panniers were so large that I’m sure if I had rooted around I would have found a kitchen sink in there somewhere.

But it was his bike frame adorned with the names of distant exotic places that sealed it. When he said he introduced himself I immediately remembered reading how he made headlines some days earlier when his bike was stolen at Portsmouth upon arriving on a ferry from France. It was recovered shortly afterwards, abandoned in a nearby park, the thieves no doubt realising it was too hot to handle!

Aged sixty six at the time, Heinz and his bike have become legends in the world of long distant travel. Setting out from his native Germany at the age of twenty-two, he had cycled around the world over ten times. He had visited most countries, but apparently has never returned to his native Germany. He had covered almost 350,000 miles on the same bike, which itself has been stolen and recovered five times and had its frame broken and welded 16 times.

Born in the small town of Hövelhof, in 1940, Heinz Stücke’s worldwide adventure began in 1962: the same year the Beatles also launched onto the world stage. He has travelled almost non-stop, covering over fifty miles a day on average.

He’s been arrested, robbed, and shot at, and had four collisions with cars. He’s been acclaimed in every corner of the planet, but seldom hangs around to enjoy the admiration his unique status brings him. He’s an Honorary citizen of Jackson, Alabama, and has been welcomed by Emperor Haile Selassi of Ethiopia. He’s a timeless wanderer with his precious diaries buried deep within his luggage. 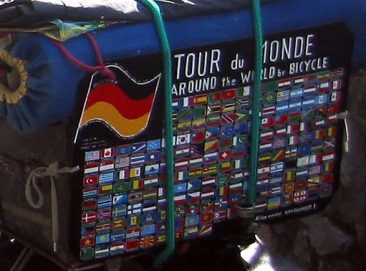 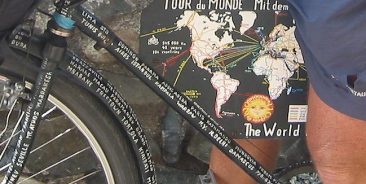 ‘Where is he now?’ It could be Tomintoul, Tottenham, or Timbuctoo. If you encounter him on the move, as I did, you’ll soon see him disappearing up the road with his motto encircling the German flag at the rear of his bike – ‘Be Carefree – Be Mad – Be a little bit bad – It’s the unknown around the corner that turns my wheel ‘

….and then see Heinz giving a few Youtube tips on learning new languages, followed by a sequence of further interviews https://www.youtube.com/watch?v=FJ8sJbpIEFo