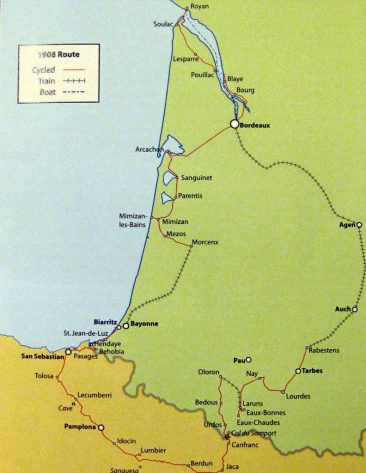 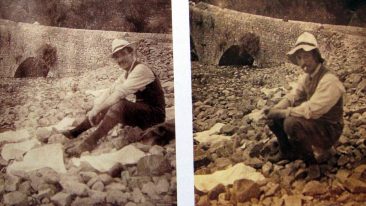 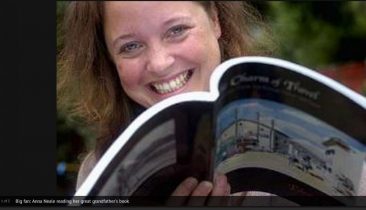 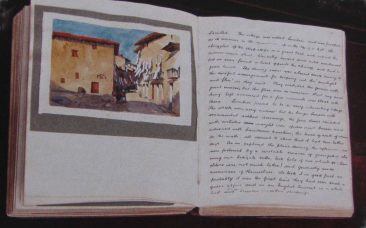 One of the pleasures of being a cycling website editor is the sometimes intriguing contacts from folk that have interesting stories to tell,  Not least of these was a contact from Anna Neale telling of an account of a 27 day cycle tour by her great great grandfather Edward (Ted) Popple, and his childhood pal Crawford Plenderleith in 1908.  Its legacy remains in the form of a well worn leather bound diary of the trip.   This was later published, with Anna most generously letting me have a copy which I still treasure.  Grandson James White sensitively edited the diary, seeking to retain as much as possible of the original style and content, whilst acknowledging that the imperial arrogance of that time, does not always sit comfortably with today’s attitudes and value systems.

The story of a ride by Anna and members of her family to commemorate the centenary of the tour, appeared thus in the Manchester Evening News on the 14th April 2010 >

.THE family of an artist have retraced the Edwardian bike journey chronicled by their ancestor in a book he wrote and illustrated 100 years ago. The dusty leather-bound account of his epic adventure with childhood friend Crawford Plenderleith lay forgotten for decades, until it was rediscovered by his grandchildren.

THE family of an artist have retraced the Edwardian bike journey chronicled by their ancestor in a book he wrote and illustrated 100 years ago.

The dusty leather-bound account of his epic adventure with childhood friend Crawford Plenderleith lay forgotten for decades, until it was rediscovered by his grandchildren.

Members of Ted’s family – from Chorlton, Levenshulme and Didsbury – recreated the journey in honour of the 100th anniversary.

Now the family have had their ancestor’s adventures published, coupled with watercolours he painted en-route, in a book entitled The Charm of Travel: An Edwardian Cycle Trip Through France and Spain. 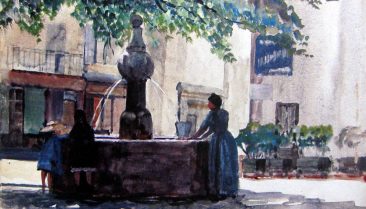 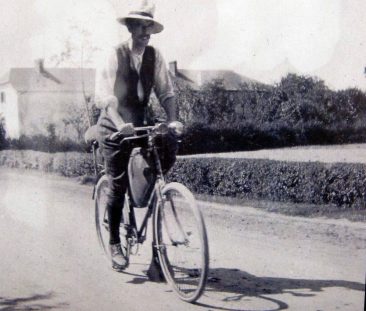 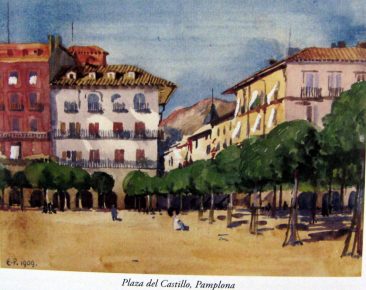 Family set off 100 years later to the day.

Ted’s grandsons James and Rob White, his great-grandchildren Dan White and Anna Neale, and his granddaughter’s husband Peter Cook set off on July 31 – exactly the same date Ted had started on his epic quest through France and Spain.

Anna, 32, of Chorlton, said: “It was 100 years since my great-grandfather made his trip so we decided it would be a great opportunity to spend some time together as a family and recreate the journey.

“Normally you don’t feel any connection to a relative that distant, but it really makes your ancestry come alive to know you are retracing their steps.” Ted’s grandson James, 58, added: “It started off as a whimsical idea, and suddenly we were planning the real trip. It was very satisfying to complete, particularly at my age! My mother used to tell me the stories of grandfather’s adventure when I was little, but I never heard them first-hand.

“We saw most of the places my grandfather had seen, in some places you could pin point exactly where he had stayed and the views he painted. Some more rural parts were virtually unchanged.”

A week less to complete the trip.

The family believe it took Ted around one month to make the journey, but with modern bikes and improved roads, it took them just 23 days.

Great-grandson Dan, 30, who lives near the McVities factory off Stockport Road, Levenshulme, also took part in the trip although he had to leave before the end to complete his PHD in cancer research. Ted stopped along the way sketching and painting watercolour scenes of the people and places he passed; families bathing on the San Sebastian waterfront, the unexplored caves of Lecumberri where he got lost, and scores of village scenes depicting typical Basque life all feature in the account of his trip.

Ted’s paintings remain in the family.

The family still have many of Ted’s holiday paintings dotted around their homes.

The book has been published with an afterword by James and Rob, featuring some of their own comparative modern day images which match up with the Edwardian paintings.

Budding artist Ted was a teacher who moved to Manchester in later life; he began his month-long trip from his Hertfordshire home, aged 29.

Ted and Crawford travelled from London to Bordeaux by train and then cycled a route that took them along the Atlantic Coast to the Spanish city of San Sebastian, before turning inland to Pamplona and then over the Pyrenees to Lourdes. Finally they spent a few days travelling through the Bordeaux wine country, before returning via Paris.

Past lifestyles – British and European.

“The book is crammed with unusual incidents and acute observations of a long-vanished way of life. My great-grandfather travelled with the improbably-named Crawford Plenderleith, a friend from childhood. They cycled in woollen tweeds in stifling heat along roads that were often no more than sandy tracks,” Anna said.

During their adventure, Ted and Crawford got lost in an unexplored cave network, encountered bands of travelling entertainers, were attacked by dogs and met an English authoress in exile in the high Pyrenees.

The 21st Century travellers took the Eurostar to France, rather than the ferry, but most of their route remained unchanged from the original.

They also brought Ted’s trip into the modern age by using digital cameras and a head-cam to record their journey and capture images of the same places Ted had painted on the journey. 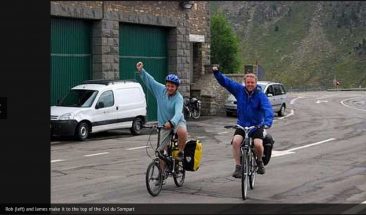 Trainee teacher Anna, who lives on Upper Chorlton Road, added: “By comparison we had a pretty easy time of it. Our bikes weighed half as much and they had gears – a feature unknown on Edwardian bikes – which made the climb over the Pyrenees a good deal easier. And we never faced the same kinds of perils. The dogs were docile and that cave system is now well lit and open to the public!”

The book is now available to buy as a hardcopy, priced £14 or as an eBook, priced £3.50, through Sagegrouse Publishing’s website at www.sagegrouse.net .