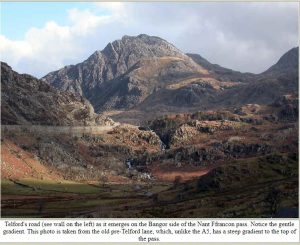 Around mid-day on Thursday, 18th August 1898, a cyclist who was not known locally started to descend the Nant Ffrancon Pass from Llyn Ogwen to Bethesda. A Llandegai farmer, who had two passengers in his cart (Leeds solicitor W S Hannon and his son), was heading uphill in the opposite direction towards Llyn Ogwen.

A little further on, two cyclists who were also riding up the pass, dismounted when the stranger passed them ‘looking flustered’ and hurtling downwards at the ‘speed of a mail train’ with his feet off the pedals and unable to control his speed.

As the cyclist approached the farmer’s cart, Mr Hannan remarked to his companions, “that man will come to grief”. Apparently the stranger bounced off the cart, hit the ground and received a fatal injury to the head. It was later said that he was riding an ‘old style racing bike with no brakes’.

Soon the owner of a wagonnet heading towards Bethesda arrived on the scene.  He conveyed the body to the Douglas Arms from where it was later transferred to a mortuary pending a coroner’s inquest. Police enquiries throughout the kingdom failed to establish the identity of the deceased. His age was estimated at 35yrs.

No Pauper Burial for him.

Mr D Griffith Davies, a local solicitor and the foreman of the inquest jury, said it had been decided that, as no relative had been traced, a collection would be undertaken forthwith among the townspeople to defray the cost of a public funeral, so that the deceased’s burial could be conducted without any tinge of pauperism. It was later reported that even had the arrangements been made by the man’s own relatives, they could not have been carried out more reverently or considerately.

On the 15th August at 6.30pm, after a half hour delay in case relatives turned up, a crowd estimated at 1200 gathered on the road between the Douglas Arms and Glanogwen Church where the interment was to take place. In addition to local traders, who closed shop early, and quarry workers who had but an hour before completed their day’s shift, the procession on the short journey comprised many women and children.

The Rev R T Jones led the way up the path into the church to the strains of the traditional Welsh hymn, Crug y Bar.

After the service the coffin was borne to the graveside. It was constructed of fine pitch pine with black furnishing and a breastplate bearing no inscription.

Later a small slab was placed at the head of the grave bearing the inscription: ‘Died 11th August 1898: not known’. It was said at the time that the occasion reflected the greatest credit upon the people of Bethesda

The Story Was Yet to Unfold.

But that’s not the end of the story… Some time later, the exact date is not known, friends or relatives came searching for their lost one. The burial certificate was amended to read George William Grossley, 6, Tillingham Street, Sparkbrook, (near Wolverhampton/Birmingham).  His age was given as Thirty Years. A new headstone was erected bearing the inscription:-

Who Was Killed While Cycling

The Parents Wish to Place on record

The Christian Spirit of the Inhabitants

Of Bethesda in burying their son

Before he was identified

He is not dead, the son of our affection,

But gone into that school where he no

And Christ himself doth rule 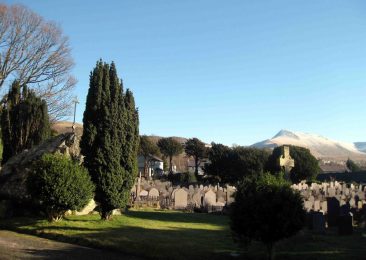 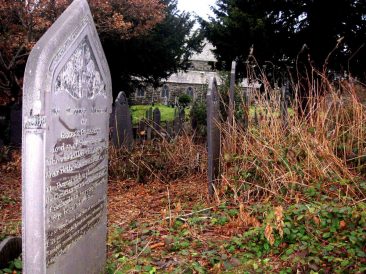 We know nothing more of George, other than the information below in the 1891 Census. It is possible he died unmarried without children, and so has no direct descendants alive today. However, he may have had siblings bearing children with descendants in the current generations.  Perhaps the following will attract visitors seeking and finding a sad yet rich family root.

I, Leopold Terrace, Aston, Birmingham (Parish of All Saints)

Our thanks are due to the verger of Glanogwen Church, ‘Albert’, who first informed us of the existence of the grave.  Also the staff of the Gwynedd Archive Record Office,Caernarfon for their assistance in tracing the newspaper report and the exact location of the grave.

Since writing above we have been contacted by a non- blood relation within the family, now living in South Wales, who tells us it has always been an understanding within the family that George committed suicide. It seems it was not known to the current family generation the circumstances of his demise until this webpage was seen on the internet.

It is worth recalling that when Bethesda was extending such generosity of spirit to a deceased stranger, its own townspeople were under the oppression of landowner and employer, Lord Penrhyn, to a degree almost without equal in Victorian Britain. Throughout the kingdom the plight of the people of Bethesda was uppermost,  as illustrated by this support from the Yorkshire coal mining town of Barnsley.

To understand a community is to know its history.  For the student of social history, this may tempt further study.


Finally, there is an urgent appeal for funds to carry out urgent repairs to Glanogwen Church.  Do contribute if you are able. 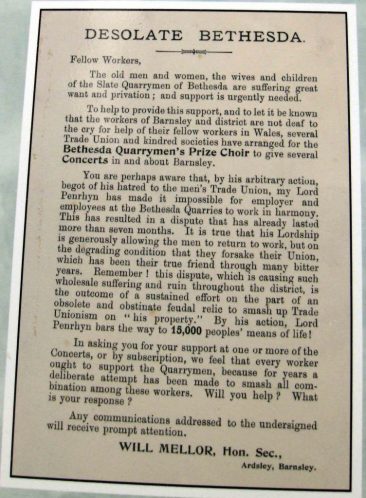 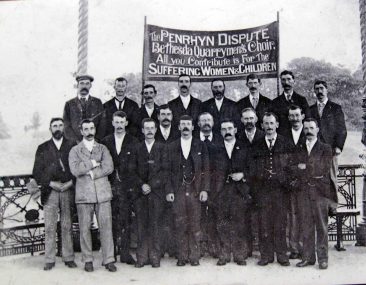 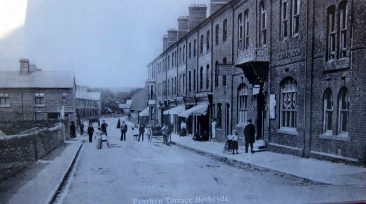