Two 12 year old friends with their panniers filled with nothing but sweets, cycle 200 miles during the second world war so that one could visit his family.  It’s hard to imagine modern day parents would allow their children to cycle very much beyond their front gate, let alone on a trip that was so arduous and filled with the perils of wartime.  But Jack’s parents didn’t mind a jot and waved off him and his friend Gilbert Crampin during the Easter holidays of 1941.

‘We had nothing in our panniers but sweets that we had been saving with our coupons’ laughed Jack now in his late eighties. He now lives in Penrhynside, near Llandudno, with his wife Mari.  ‘We just wore long woollen socks and shorts, had a raincoat, and cycled on Raleigh bikes’.   Gilbert had been evacuated to Penmaenmawr, but was missing his family in Grimsby so we thought it would be fun to cycle there..

Ninety miles cycling in one day to Manchester

The two Ysgol Friars pupils cycled to Manchester in just one day and stayed at Gilbert’s Aunt’s house.  ‘It was tough going as the sign[posts had been taken down because of the war in case the ‘jerries’ landed’.  We often went the wrong way, and mostly had to find our way by asking people, and sometimes knocking on doors’  The toughest part of the route was climbing up the notorious Snake Pass, the name given to the remote higher reaches of the A57 road where it crosses the Peak District between Manchester and Sheffield.  It was awful because of the rain. We got drenched, I even felt like giving up but Gilbert encouraged me to to go on’ said Jack.  We only had three gears on our bikes.

At the top of the pass there was a cafe and some soldiers treated us to a warm drink.  Feeling a little more restored Gilbert and Jack continued on their way.  They were travelling to the youth hostel in Tickhill in the West Riding of Yorkshire.  ‘We has started to panic as we were losing light and had come to the edge of an airbase near Sheffield.  But a soldier told us to move on as the Germans were dropping parachute mines in the area.  It was pretty scary as we kept hearing the thud of mines going off.  They had killed a lot of people’.  The boys eventually made it to the Youth hostel. Much to Gilbert’s amusement they discovered in the morning they had slept in the ladies dormitory by mistake.

They spent two weeks in Grimsby staying with Gilbert’s family who owned fishing trawlers (see related below).   ‘On our way back to Wales a policeman stopped us in Manchester and asked what we were doing.  When we told him he didn’t believe us and asked us to accompany him to the police station.  He phoned my father who owned the Mountain View Hotel in Penmaenmawr and asked him if our story was true, and then reluctantly let us go.   I think he must have thought we had absconded from a children’s home or something’.

‘It was a tough journey back because of all the fog.  We were only allowed tiny lights on the bikes because of the war and I remember all the dust in our eyes from the factories’.  The boys arrived back to Penmaenmawr without any fanfare or welcoming party.

After the war Jack was called up in 1946 to serve in the Royal Navy, as did Gilbert six months later.  ‘I was a messenger boy on a bike for a while, and saw a list of new recruits coming to Plymouth.  I saw Gilbert’s name and saw him walking in a group of around forty coming in.  I rushed over on my bike.  However a car was on my tail and hooted like mad for me to get out of the way and I had such a shock I fell off my bike’.

The driver turned out to be Prince Phillip who was an officer at the base and who hadn’t even bothered to stop.  Jack later married and had three children and ran the Bartles Ltd newsagents shop in Penmaenmawr for fifty years.   Gilbert became an accountant and also married but sadly died of cancer in his mid thirties.  Before his death he made Jack his daughter’s godfather.  Jack said ‘Gilbert was my best friend.  We had so much fun together and he always kept me going even when it was tough’.

A lament for cycling.

Jack stopped riding his bike many years ago.  Now he wishes he hadn’t

And upon reading his account, a thoughtful reaction from Jack’s Welsh Assembly Member……. 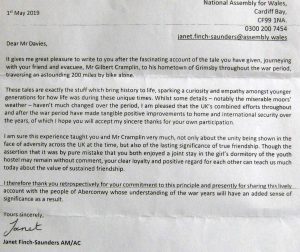 Archive footage of Grimsby at War