The perpendicular Lorelei rock rises dramatically at a bend in the most beautiful section of the Rhine gorge. It is famous not only for its natural beauty, but also because it is associated with Germanic myths and legends including that of the Nibelungen.

Two centuries ago the great German poet, Heine, incorporated some of these myths in his poem, Lorelei, which enjoyed an immediate success, as did the adaptation of it as a song by the minor composer, Friedrich Silcher.

The fact that Heine had been born a Jew, who converted to Christianity in his early twenties, did not affect the popularity of the poem or song.

Things changed when the Nazis came to power, as is revealed in the following article from the July 1937 Gazette of the Cyclists Touring Club (CTC) by W T Stead.   It describes his taking a young friend Jack on his first cycle tour abroad, centred on the Rhine, during which he encountered anti-Semitic poison for the first time.

Happily all that is in the past.  Heine’s greatness is recognised again in Germany,and the Dutch violinist, Andre Rieu, includes the tune of Lorelei in his repertoire when he plays to German audiences.

WT Stead tells of his love of Germany by bicycle >>

Memories of my first trip abroad came flooding back to me when I took Jack with me on his first continental tour. It was his first experience outside the British Isles. His first impression of being a passenger on an impressively labelled boat train and his uneasiness when he saw our bicycles being recklessly hoisted onto the boat, and his half concealed doubts about his internal security as the boat got underway – they all recalled my sensations of several years ago.

With saddlebags under our arms we passed through the hands of the Belgium immigration and Customs officials. Jack thought it disappointingly simple. Third class travel proved more comfortable than he expected, and he thoroughly enjoyed his attempts at conversation with other passengers. So did they.

With people, towns, countryside and the train itself taking our attention, Jack found time passed quickly. In the evening we arrived at our destination, and a short ride (the first on the right-hand side of the road) brought us to our hotel. Dinner, a stroll round the town, and the novelty of a Continental bed completed the first day’s series of surprises and delights.

For the start of the actual tour we cycled through a German speaking district of Germany that is now Belgian territory. At a bleak spot in the magnificently green countryside we rode over the old frontier, and a little later in the day came to the new boundary, where the road was barred with red poles. We were received by a German frontier officer. Formality was reduced to a minimum.

It was good to be back in a country I love and among a people whose friendship I cherish. Jack seemed impressed too. ‘Well, what do you think of it so far’ I asked. ‘Fine,’ he replied. Then he added ‘ Did you hear those chaps say ‘Heil Hitler to each other when they passed?’

Not far from the frontier we ran into the first village. An odour of cows was in the air. Contentment and rural fellowship seemed inevitable in such surroundings. The tiny village school stood by the roadside and as we passed Jack glanced towards it.. Something took his eye and he stopped.

From Heil Hitler to Der Sturmer 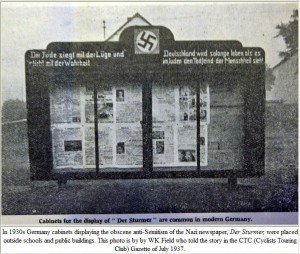 ‘What’s this say? ‘He called. I returned to where he was standing, looking at the showcase in the school playground. Pages of a newspaper were displayed in it, and over the top was the inscription that Jack wanted me to translate. ‘The Jew succeeds by lying and is killed by the truth. Germany will live so long as she recognises in the Jews the enemy of humanity.’

These cabinets for the display of Der Sturmer** are by no means rare. To the British mind they seem childish by the their ferocity, and that apparently was the impression of this one on Jack’s mind. It was his first introduction to organised anti-Semitism. He made little comment, but what he said would never survive the editor’s pencil. Before the day was out he had probably forgotten the incident – at least temporarily – for his first evening in Germany was a veritable festival of warm hearted hospitality.

The host at our guest house welcomed us. And his daughter welcomed us. Jack has special memories of his hours spent with the daughter learning the language.

It was the same on other days. Everybody seemed genuinely glad to see us, and at every stopping place on our journey we experienced the unforgettable ‘guest – friendliness’ that is instinctive in the German people. Eventually we reached the Rhine Valley

In his delight Jack chatted like a schoolboy, increasing my enjoyment with the radiance of his own. There was not a cloud in the sky as we rode beneath vine terraced cliffs, with always a castle in view towards Bingen. We passed the Lorelei, most famous of the Rhineland crags.

But what of the song Lorelei?

Isn’t there a song about the Lorelei?, asked Jack. ‘There used to be,’ I replied. ‘A year or two ago you would have heard it on every hand in the district. As the pleasure boats passed here the bands and orchestras used to play it. It was played in cafes, and it was played by wandering minstrels. Tourists and holiday makers of all kinds used to sing it, and almost literally the song of the Lorelei haunted the Lorelei Rock. It was a lovely song, but they don’t sing it now’.

Jack guessed why, and again his words were more forceful than literary.

That evening, as an experiment, we asked the pianist in a cafe at which we called if he would oblige with the song of the Lorelei. ‘A little later, gentlemen’, he said, for politeness and tact are attributes of all true Germans. No refusal could have been given with greater gentleness –nor with more definite finality.

Similar finality, but less diplomacy, met our next request. This time we asked a young accordionist, a member of the Hitler Youth. A fine looking youngster he was, fresh skinned and bright eyed. There was no pretense about his fervent enthusiasm for national socialism.. When we mentioned the song we wanted to hear, he was surprised, indignant almost. ‘It was written by a Jew’ he said, and we felt that we had unwittingly asked for some obscene ditty.

Return to England – to find Lorelei in a theatre.

We never heard the song of the Lorelei, but we had a wonderful holiday, and Jack returned to England with very happy memories of his venture abroad. Our last few hours together were spent in a news theatre in London, where we passed our time until my train left. The programme included a Disney coloured cartoon entitled, ‘Neptune, King of the Sea’***. ‘Listen to the music, Jack’, I said. ‘That’s the song of Lorelei’.

Neptune – King of the Sea (Disney) – the tune of Lorelei (1 min 5secs>)  Sadly this hyperlink has now been severed for users in the UK https://www.youtube.com/watch?v=JNOt9LEX3ho