Urgent coast protection work  has made it necessary for the road and promenade at Old Colwyn to be closed to traffic for two years or more.  The work lies directly on National Cycle Route 5.  Running parallel to the landward side of the highway, there is a five foot wide pathway approximately one mile in length at the base of the main line railway embankment. This has been used for many years by cyclists accessing  the coast from the residential areas inland, or as a refuge from high waves in storm conditions.  It has been shared successfully with other users.

With the closure of the promenade and roadway the Highway Authority has  allowed only for cycles to be pushed on foot along this path.   The path, level for its entire length,  lies on a compelling journey desire line used by many riders for inter-county commuting and leisure riding.  It also serves as a most important corridor for international  cycle tourists.   Although the width of the railway path is below the ideal standard for mixed-mode two-way use, there are other examples of shared use routes within and outside the county that have similar dimensions and operate without recorded conflict.

For reasons unclear the highway authority has established a cycle route diversion taking riders thro’ one of the busiest expressway interchanges in North Wales when clearly no account has been taken of the wide spectrum of riders within the cycling community.    Convoluted waymarking takes no account of its substantial hazards both on and off -road. Clearly no safety audit has been conducted taking account of the multiple negative features and conditions prevailing on the routes,   These range from unacceptable gradients, unsafe locations, journey time deficit compared with the rail path route, and conflict with fast moving multi-directional traffic.  No regard has been made for riders with special physical and mental needs for whom cycling is so important as a means of accessing the fruits of the inclusive society we seek to achieve.

A Pedestrian’s Perspective on this National Cycle Route 5 Diversion and its presumed ‘justification’.

The following narrative is the product of a lifelong cyclist and walker.   Much closer to ninety years of age than eighty, he was accompanied on some occasions by his wife of similar vintage.  Over a dozen trips on foot were undertaken of the routes discussed here.  And over thirty hours of observation and interviews with walkers and cyclists were involved.    Without exception when sharing the limited space available on the railway path, exchanges with other users were courteous and good natured.

As a pedestrian the writer had no problem stepping to one side to facilitate comfortable passage for cyclists and other walkers.   Overtaking cyclists, some with luggage panniers, required little more space than walkers, runners, or wheelchairs.users. Significantly, most walkers interviewed saw no problem sharing space with cycllsts, but adequate warning of approach from the rear and reducing speed was considered important; the writer has long lobbied for this as an essential safety practice for both cyclists and others sharing space.

On the other hand, a proportion of walkers displayed agitation and a measure of intolerence sharing space with cyclists pedalling, even when the cyclist was riding  at a walking pace.  From a walking perspective this author found little or no substance to the concerns expressed, other than cyclists were failing to conform to the signage co-authored by Sustrans, Griffith’s Engineering and the Conwy Highway Authority.    It was clear the dismount signage alone was provoking disharmony when no proportional cause existed.     Had the signage been  ‘Share With Care’ most complaints would likely have evaporated and cyclists would not be exposed to the frequently reported provocative admonishments,  and sometimes threatening conduct of the few who resented their presence based on pre-existing perceptions of path users of whom they had no prior knowledge.

For long periods during the day when the weather is fine it is not unusual to see less than a dozen on the path including cyclists often riding when the way is clear.. At other times it is often devoid of users.   Equally the path is used by dog walkers, either living in the vicinty or arriving by car and parking nearby.  It is not unusual to see dogs off the leash  In one incident recorded to video, the writer witnessed a polite young cyclist forced to escape a dog with a removed muzzle by climbing over the path boundary wall.

In inclement weather conditions or during the hours of darkness, the most likely to be seen will be commuting cyclists, some working shifts for the emergency services and hospitality industries.   Anecdotal reports from contractors working 24hrs on similar routes suggests the numbers are easily underestimated. 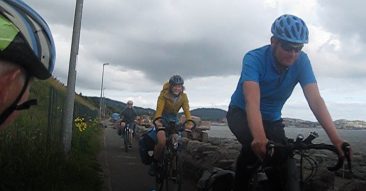 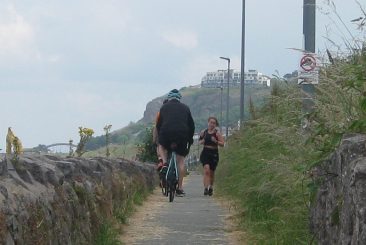 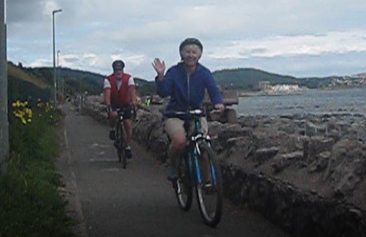 (2) Cycle Diversion(s) via A55 Expressway (J22). Click for Personal Testimonies

In three words the diversion(s),  (off &on road) may be described as unappealing, unsafe and unecessary .  With the needs of the wide spectrum of cyclists and the limited riding ability and experience of many in mind, it has clearly not been tested for safety and riding in comfort.  Indeed much of the length cannot be ridden in the saddle by a significant proportion of the cyclists using this popular section of coastline.

In recent times Sustrans  has removed 753 miles from its national cycle network (4.5%).  This route diversion fall well below the standard of many of those miles removed.

The provenance  of the decision to deny cyclists pedalling access to the rail path may be traced to minor spats between dog walkers and cyclists at an earlier stage of the coast protection work.  At that time the cycle route ran through the work site; this no longer applies.  Cyclists complained that dogs were not sufficiently under control and riders were unable to proceed in safety.  A blanket decision was subsequently taken by Conwy Highways that cyclists should henceforth proceed on foot, even when the way ahead was clear.  When the current phase of construction commenced the same dismount policy was continued, even though the rail path, narrow though it is,  provides sufficient space for users to pass in comfort and safety with a modicum of courtesy and common sense of the sort we see daily as we negotiate our crowded public spaces.

During the writer’s studies it was clear that both the diversion and dismount policies were unsustainable as evidenced by cyclists continuing to use the rail path in preference to the diversion..  Given the locality and the nature of demand, this was entirely predictable and should have been recognised from the outset by the highway authority.

Over the past several decades there has been a steady build up of support for cycling as the antidote to many of the health & mobiity problems modern society faces.  Ironically as the support for cycling has increased, so there has been push back from territorial and mobility interests.  Such is to be observed here with cyclists being directed into a hazard laden diversion when a Freedom of Information release revealed no incident history justifying pedalling exclusion from the rail path merely because it is narrow.

The effect of such tactics can be see in th reluctance of some  highway authorities to risk their limited resouces and public funding on the most ambitious projects,  or those most likely to face NIMBY style opposition.  So we see back pedalling at local levels of the worthy aspirations of such as the Welsh Active Travel legislation fully supported at national level but undermined by back pedalling at local level.   And so it can be seen here with priority given to dog walking over active travel cycling.

‘Anti-pedalling signage should be replaced with >>>>> 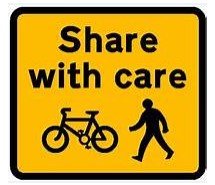 In the absence of a professionally conducted Safety Audit and Impact Assessment (Equality Act 2010 S149 (a) A Public Authority QUOTE:- ……….must….. eliminate discrimination, harassment, victimisation and any other conduct that is prohibited….. ) Conwy CBC should consider itself at significant  risk of  being seen Acting Without Due Diligence and accordingly exposured to litigation in the event of a cyclist suffering injury on the diversions through no fault of their own..

Sustrans must also see itself exposed to public censure in approving and actively supporting, without transparent justification, a diverson falling well below the standard it aspires to achieve for all cycle routes –  Way Marking alone is no substitute for a professionally conducted safety audit.

For all concerned, Users, Professional Delivers, and Decision Makers alike, this unacceptable position must be rectified without delay.  The NCR5 diversion signage should be removed and Anti-pedalling signs on the railway path replaced with ‘NCR5 Share With Care‘.

NEWS FLASH.  During Bank Holiday weekending 27th August 2022 gates were erected at each end of the Railway Path.  It seems that officialdom sees ‘cycle pedalling’, even for children and the disabled, as an anti-social activity. 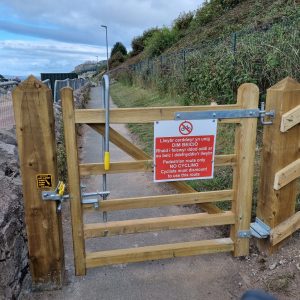 Many with special needs find it easier to cycle than walk.