Following the appointment of Mark Drakeford as Welsh First Minister, his first appointments include former Sustrans Cymru CEO Lee Waters as Deputy Minster for Economy and Transport.   An intriguing appointment.   Lee is a long standing proponent of Active Travel and has recently set up a Cross Party Active Travel forum, embracing representatives from a range of voluntary bodies. 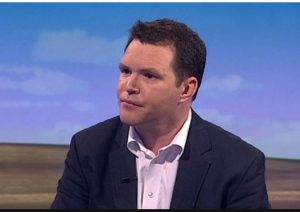 To give the reader an idea of where Lee is coming from we are re-visiting the speech he gave to the Senedd on the 28th November 2018 during a debate on the controversial M4 Bypass.

At a time when the planet is beginning to stir to the threat of climate chaos, and international social disorder arising from lifestyles and  carbon – fueled hyper mobility, this quiet voice of reason must surely gain  traction as the price of global environmental disintegration comes closer to home.

I think the motion before us is fairly uncontroversial; I think it’s a matter of fact that the decision will be made by the next First Minister.  In the budget, the decision to sign the Orders is primarily procedural one, and as I understand it, without signing the Orders, the public inquiry report won’t be able to be published. So, I hope that there’s unanimous vote here this afternoon in favour of the motion.272

Rather than dwelling on that, I just want to address some of the longer term issues I think we, as a National Assembly, need to start thinking about ahead of that budget vote. It’s been stated that my party said in our manifesto that we would build a new motorway around Newport, and, of course, at that time, the cost was around £700 million. In fact, the First Minister told this Chamber that it would be way under £1 billion. The public inquiry was told that had gone up to £1.4 billion—it had doubled. We now understand that it’s gone up to £1.7 billion. Now, there’s no way I’d think that this scheme’s going to come out anywhere under £2 billion.

Two thousand million pounds for 12 miles of road that is set to produce average journey-time savings of between two and a half and five minutes. Now, that seems to me a completely disproportionate investment for those levels of benefits. And as that cost has changed, we need to reflect on the cost benefit of this scheme.273

The road sponsors—and, let’s call a spade a spade, this has been pushed by industry, by the Confederation of British Industry, their lobbying organisation, who have a material interest in seeing this scheme succeed. Why wouldn’t they? They’re going to get £2 billion of public money going through the company books. They’re quoting the official Welsh Government scheme benefit of a £2 billion return on investment. That’s £2 billion in, £2billion out. Now, that doesn’t seem to me a terribly high return on investment.274

But let’s challenge that figure because that figure is never challenged. The media doesn’t do it, we don’t do it; we simply repeat and accept the logic of a £2 billion return on investment. How do they get that figure? The figure is built on sand; it’s built on what are called notional time savings—not even real time savings—notional time savings. So, they say, if you take the number of people using that road, and they save between two and half and five minutes on a journey, and they monetise that, they say that extra five minutes—let’s be generous—will produce five minutes  of extra productivity for the economy. They then multiply that by 30 years, so they come up with this fantastical figure of hundreds of thousands of people gaining an extra five minutes, and in that five minutes, they are going to produce these wonderful returns for the economy.Now, I don’t know about you, if I get to my mate in Bristol’s house five minutes sooner, that’s not going to produce a return for the economy.275

So, this figure just does not make sense, and it’s done over30 years. They are retrospectively concocting an economic formula to justify the conclusion they came to in the first place. And it’s interesting, back in2011, the M4 corridor enhancement measures report was published, which proposed number of measures to improve the section from Magor to Castleton. Nothing’s been done with it; nothing has been done on that report and how to bring about change on that road because all the highway engineers are transfixed on getting this large career-defining project on their books. So, we need to be far more sceptical about these figures. The cost, we know, has more than doubled, it’s approaching being trebled. The benefits are not what they are sold as, and I think we need to be robust in reflecting on the commitments given, especially post Brexit, when resource is going to be much more scarce, and whether or not that is the best way to make Wales more resilient to the economic shocks coming our way. If any of us were given a £2 billion cheque to spend to make Wales better, how many of us would honestly spend it on 12 miles of road to save five minutes on the average journey?276

I’d just like to make a final point about Newport, because there is a problem in Newport, and I have great sympathy with my friend and colleague the Assembly Member for Newport West, who makes the case for addressing this. The problem with Newport is that Newport is a car-dependent city. The figures are stark. In Newport, half the proportion of people walk to work that do in Cardiff—50 per cent fewer people in Newport walk to work than in Cardiff; 135 per cent of people in Newport drive to work compared to Cardiff—about a third of the number, as I say, in Newport drive to work,compared to Cardiff. The number of carbon dioxide emissions in Newport are 25per cent higher than they are in Cardiff. Newport is a car-dependent city. The Conservative council ripped up the bus lanes, and the current council have not succeeded in giving any money for active travel measures.277

As has been mentioned, the future generations commissioner has published some detailed work on what can be done in practical terms to improve sustainable transport measures in Newport. There is a problem in Newport. There’s a problem on the M4—40 per cent of the traffic on the M4 is local journeys, it’s Newport people driving from one bit of Newport to the other, and we need to address that, we need to help Newport, Newport council needs to help Newport. What doesn’t help Newport or all of Wales is blowing £2billion on a piece of road that’s going to fill up almost as quickly as it’s built

Lee Waters of the Institute of Welsh Affairs says he wouldn’t be a “nodding dog” and that if people aren’t prepared to stand for election there’s no point complaining.

“I’m a team player but I’m equally prepared to speak truth to power when it is needed,” he said.

As a former Sustrans Cymru CEO, member of the Carmarthenshire Cycle Forum and other related environmental interests, Lee has sound Active Travel credentials. 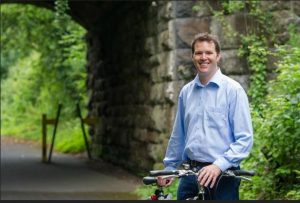 There is clearly strong Active Travel leadership from within Welsh central government.  Will that leadership be reflected at Local Government and street level?   Vibrant cycling communities will be the real evidence that Active Travel is being taken seriously by the population of Wales at large.  The jury is out.  But there are people like Lee Waters and Chris Boardman showing the way..

Dr Tom Porter.  The way we travel has changed…..