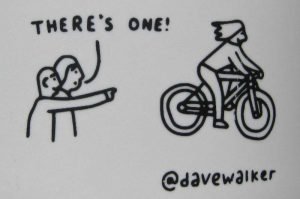 ITV  presenter Richard Madeley demanded a response from Duncan Dollimore of CyclingUK as to why cyclists were not compulsorily insured for damage or injury arising from a collision with a third party.  Dollimore pointed out that organisations such as CyclingUK and British Cycling include third party insurance as a benefit of membership.
The question arose from an incident where a pedestrian died on a public highway following a collision with a cyclist.
On the question of Motor Insurance, AV Lowe, a cycle user with vast experience of cycling and public transport writes:-
‘The reason that cars (not drivers*) have to have insurance (or an alternative) is that cars can cause substantially greater harm to persons & property than pedestrians or cyclists, and prior to the 1903 Motor Car Act any civil claim was handled through the standard processes of civil law for securing the compensation from the person responsible.
The sums were such that damages were generally recoverable from the liable party, and it was also rare that they would be able to flee the scene at speed with identity concealed within the car (a reason why cars need registration numbers but pedestrians, cyclists and horse riders don’t).
Sensibly Motor Car legislation has kept this detail through to having Section 170 where the driver of a vehicle must provide details of the insurance that the keeper has for that vehicle.
A keeper can name multiple drivers on their insurance, and even have an open policy to permit them to add drivers (with clear caveats about recording who those drivers are, and what state their licenses are in). Car hire companies obviously operate in this way. but basically very few DRIVERS are insured – the vehicles are.
That said if a registered keeper insures a car with the clear knowledge that the principal user would attract a higher premium, then the T&C will almost certianly void the policy.

*It is almost impossible to get insurance as a driver – trust me – when I got rid of my car in 1976 I wanted to be able to drive any other car that I might borrow, or be asked to drive by the registered keeper. Short of having trade plates,(which generally prohibit the carriage of passengers when a vehicle is being delivered or tested) there is no way you can get driver insurance. This of course poses some interesting issues for the cyclist with several bikes. Should insurance be for every bike or the rider?

For a considered view from a legal perspective, see the opinion of Martin Porter QC in his blogs for the 23rd and 30th August 2017

It seemed from Richard Madeley’s body language at the start of the TV interview that he saw Dollimore as a potential apologist for poor cycling standards, which he so clearly was not.  Dollimore has invited Madeley to join him in cycling around the capital to get a taste of what life on the drag strip is all about.  We await developments – if the invitation is accepted.