A cyclist brought to a sudden halt by a potential ‘assailant’ placing hands on the handlebars, renders the rider defenceless astride the cycle, and vulnerable to physical attack. (Edit)

The  incident below starkly illustrates one of the risks faced by cyclists lawfully going about their everyday business’    It calls into the question the widely accepted Heirarchy of Users where cyclists  are placed below pedestrians in the pecking order of vulnerability, whereas vulnerability takes many forms in different settings.  Pedestrians for instance are not expected to share space with motor traffic on the highway.  Cyclists should at least be placed on an equal footing with pedestrians.  They are often disproportionately placed at disadvantage in terms of bodily risk.

Clare James was brought to a sudden halt by a potential ‘assailant’ placing his hands on the handlebars, rendering her disabled on her cycle;  unable to escape, and unprotected from a potential head-butt.  She is to be commended for her courage in drawing attention to a largely under-reported aspect of risk carrying cycling through no fault of the rider.

Woman left ‘petrified, visibly shaking, unable to speak’ after man confronts her while cycling in Cardiff city centre
Clare James, 49, was riding her bike on a cycle lane when a strange man grabbed her handlebars and told her to ‘get off and walk’. Moments later someone else tried to do something similar.

A woman was left “petrified, visibly shaking, unable to speak” after a man confronted her while she was on her bike in Cardiff city centre. Climate activist Clare James, 49, was cycling down Castle Street on Thursday night, when a man grabbed her bike, refused to let go and ordered her to get off.

The incident happened as concert-goers were leaving Lewis Capaldi’s gig in Cardiff Castle. Castle Street was closed to allow the crowds to leave safely, however the cycle lane was still open for use. As Clare cycled “at a snail’s pace” and politely asked pedestrians on the cycle lane to move out of the way, all of a sudden a man – who she estimated to be in his mid-20s – grabbed hold of her bike by the handlebars.

“I said: ‘What are you doing?’ and he said: ‘Get off your bike now and walk,” she said. After she told him she didn’t understand, the man told her she shouldn’t be cycling on the road. “I said: ‘No, no, it’s a cycle lane, and it’s open.’ But he was really aggressive and within a very short space of time I was really feeling very intimidated.” 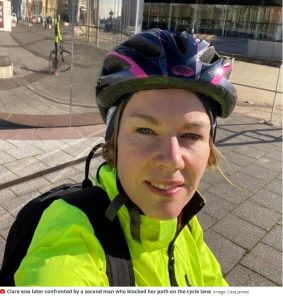 Clare added that the man did not harass others cycling on the lane, who she noted were male delivery cyclists. People started to notice what was happening and stopped to watch. “People started to come over and people were saying: ‘Let her go.’ I think because they could see that I was in quite a bad state they were saying: ‘Are you okay?'” said Clare, who works for Climate Cymru.

Meanwhile, Clare said she “couldn’t compute what was going on” nor answer anyone. She noticed three police officers nearby amidst the crowds and attempted to get their attention. She started waving her arms around and shouting for help, but said the officers did not hear her.

However, in doing so, she attracted the attention of a steward at the event, who intervened and extracted the man from her bike, allowing Clare to leave. She left the scene “shaking” but said she was fearful the man would grab the bike again or chase after her.

As she rounded the corner on the cycle lane in the direction of North Road, which was “practically deserted” compared to Castle Street, incredibly, another man, who was walking along the pavement, saw her coming and “aggressively” and “determinedly” jumped onto the cycle lane in front of Clare to stop her in her tracks. Thankfully, the traffic lights changed and she managed to skirt around the man and cycle away.

Clare said she believed the incidents happened because she “stood out as a woman on a bike”. She said: “It was so obvious [the first man] was just going to pick on me because because I was an easy target.” While she said she could understand people’s confusion that cyclists could still use the street, she believed, “there’s no way he would have done that if I wasn’t a woman.”

She also said general vitriol towards cyclists might have had a role to play. “There were two men, as far as I’m concerned last night, that really just wanted to be intimidating. They plucked me off, because I was on a bike and because I’m a woman.”

After she told him about the ordeal the next morning, Clare’s husband Brendan thought a solution might be to close streets to cyclists as well for future events. But Clare strongly believed the underlying problem with the incidents was “men’s attitudes towards women” – and also felt active travel to and from events should not be discouraged.

“I said [to my husband]: ‘No, no – maybe men shouldn’t be like that. That’s the issue. It doesn’t matter whether you close the cycle lane, whether there’s drinking involved, whether there are crowds,” she said.

Clare has since shared her experience on social media, and other women have expressed their solidarity.

“I’ve been shouted at on my bike by men and teen boys – some jumping in front of me as I cycled on the Taff Trail. It’s really intimidating,” said one. Another said: “I cycle and walk a lot in Cardiff at night and have felt less and less safe doing so over the last few years.” A third wrote: “I have many friends who cycle around the city and have had similar experiences with men harassing them as well as being on the receiving end of verbal, racist abuse.”

Avid cyclist Clare, who has been using her bike in Cardiff for four years, said that before the incident she felt “reasonably safe” on her bike as she would be able to “get away” if any trouble were to come her way. But now she isn’t so sure. 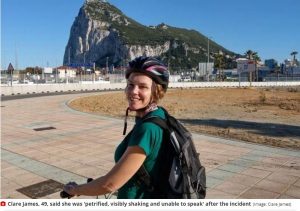 “I’ve always felt I should be able to get around safely in the country, in Cardiff,” she said, adding that she didn’t want to “give in” to such an incident and wouldn’t stop cycling. “But I have to say that it’s definitely made me far more aware that I’m not as safe on my bike as I think from people who are on foot, from pedestrians.”

The incident comes after a woman filmed the appalling harassment she was subjected to by a stranger as she walked down a Cardiff road. Emma Grayson, 22, said she was “really scared” when a stranger got off his bike and started following her at around 9pm on Sunday for ten minutes along Newport Road while making “inappropriate comments”.

Detective Superintendent Ceri Hughes from South Wales Police said: “Firstly, I am sorry to hear what Clare has experienced in Cardiff and encourage her to make contact online so we can investigate. Everyone has the right to feel safe, wherever they are, and nobody should be subjected to violence, harassment and intimidation.

“Tackling violence and abuse against women and girls is a long-standing priority for South Wales Police and we recognise that concern regarding personal safety and violence is as great as it has ever been. As well as high-visibility and plain-clothed patrols, we are involved in a wide range of initiatives to tackle violence and abuse including Safer Places, StreetSafe and the Cardiff Safety Bus.

“As part of the UK Government’s strategy to tackle violence against women and girls, we are part of a new online tool called StreetSafe, which allows people to pin-point locations where they have felt unsafe and to identify why that location made them feel unsafe. Using that information we can then direct our patrols and, with partners, make improvements to infrastructure such as lighting and CCTV.