Plans were released in 2015 for the design of the bypass at Bonynewydd.    Along with others including Cyclinguk, the Caernarfon & Dwyfor group of Ramblers Cymru  considered its impact on the Lon Eifion Cycleway. , This is now a very popular route for both walkers and cyclists.  Youngsters on bikes, children in buggies, joggers and families picking blackberries are all familiar sights on this section of National Cycle Route 8 running from Holyhead to Cardiff. Many international cycle tourists carry the message of this being one of the most attractive sections of their long journeys.  The tarmac surface is also ideal for the less able, who perhaps more than most value traffic free zones.  It is proposed that Lon Eifion will be disected at the southern end of thre bypass at the Goat roundabout, Llanwnda,  There is every indication that motor traffic volume and speed has been accorded priority over the safety of those travel modes targeted  in the Wales Active Travel legislation.  Walking and cycling don’t get a look in!

Currently three roads enter the roundabout, with users of Lon Eifion having to cross one, the A499 Pwllheli road.  (See on-site Aug 2015))  Whilst not ideal, it is the quieter of the three roads and crossing it was seen as a reasonable option when the Goat roundabout was built.  The proposed Bontnewydd bypass would result in four roads entering the Goat roundabout, and the designer’s 2015 solution for dealing with Lon Eifion was to route it the other way around the roundabout, so that it did not cross the new bypass.  However, under a new proposal Lon Eifion would now have to cross two roads.  One, the much busier A487 Porthmadog trunk road, putting themselves in great danger.  Drivers who may have been travelling at 60mph on an open road, or who are accelerating out of the roundabout, would suddenly have to contend with adults and children trying to walk or cycle across the road in front of them.  Would a Welsh Government minister like to do that on foot or bike, we wondered?  He may receive an invitation!

After last year’s campaign for a safe crossing, which culminated in Hywel Williams MP and Alun Ffred Jones AM issuing a shared press statement, it was thought that the Welsh Government would ensure that the plans were changed.  Objectors had proposed putting a pedestrian/cycle bridge over the roundabout, as installed over roads elsewhere in Gwynedd.  The new bypass, a modern traffic improvement scheme, with protected crossings for otters and bats, would surely not force pedestrians and cyclists to cross two busy main roads. 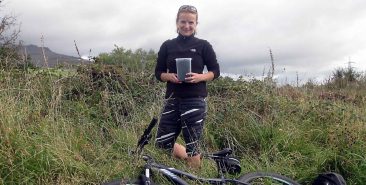 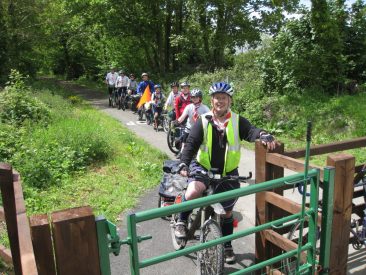 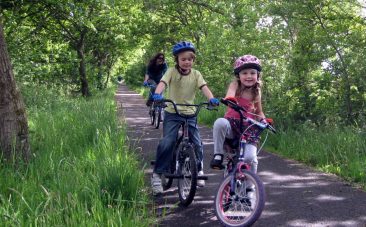 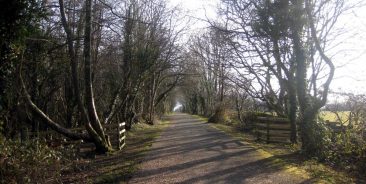 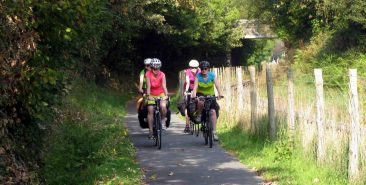 After being told that the designers were in consultations with interested parties, but not knowing of anyone being consulted, it came as little surprise to discover that no attempt will be made to provide a safe crossing at the roundabout.  This information has yet to be released to the public.    Objectors have been told details will be available  at the Celtic Royal Hotel in Caernarfon on 20 & 21 September and the Meinfod Hotel in Bontnewydd on 22 & 23 September 2016,

Critics see this as an attempt to avoid considered  scrutiny of the proposals by imposing a three week restriction for the submission of objections..  Fortunately a set documents sent to householders found its way into the hands of local critics of the proposals.

All that is ‘officially’ known at present Is a Welsh Government statement (August 2016) stating:-  ‘The existing Lon Eifion cycleway that currently crosses the A499 would be diverted around Goat Roundabout, crossing the proposed de trunked A487 and the exiting southern arm of the A487.’  (August 2016)

Both Ramblers Cymru, and CyclingUK are urging the public to attend the exhibitions and register their views. It is hoped they too will join those  who objected in 2015, and join us in objecting to the current proposals.  All objections have to reach the Welsh Government by 13 October 2016, at Orders Branch (qA1198563), Transport, Welsh Government, Cathays Park, Cardiff  CF10 3NQ   (Some people worry that objections are going to the department that is promoting the scheme, and might end up in a shredder, so they are keeping copies!).

If you represent a club or organisation, Dave Woods of the Caernarfon & Dwyfor Group, Ramblers Cymru is kindly coordinating the protest movement.    davewoods@toucansurf.com        9/9/16

This is yet another example of the mockery being made of the ideals behind the Wales Active Travel legislation.  The easy part of legislation is placing it on the statute book.  The really hard part is changing mind-sets in the opaque corridors of influence and decision making.  Quote...‘If you want cycling improvements, you have to keep fighting for them! – Andrew Gilligan, London’s Cycling Commissioner.