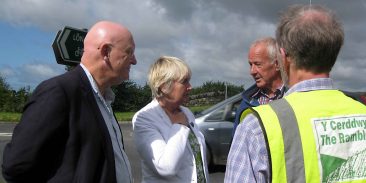 Three leading charities, CyclingUK, Sustrans, and the Ramblers Cymru are warning  Welsh Government that its plans for the A487 Caernarfon bypass risk safety and do not provide enough provision for walking, cycling, and the vulnerable, some covered by the UK’s Equality provisions.

The new A487 bypass would be routed from the A487/A499 Goat roundabout, heading north and skirting Dinas, Bontnewydd, Caeathro and Caernarfon, before rejoining the A487 at the Plas Menai roundabout, near Y Felinheli.

Under the Welsh Government’s own Active Travel Act, road developers have a duty to consider and improve walking and cycling provision.  But Sustrans Cymru, Ramblers Cymru and Cycling UK warn that those needs are not being considered properly.  The public inquiry for the £125 million scheme is due to begin on Tuesday 13th June 2017 and campaigners are warning that time is running out.

At the top of the list of concerns raised by the three charities are:

“The Welsh Government was rightly proud when the National Assembly passed the Active Travel Act in 2013, but its current plans for the A487 bypass risk riding roughshod over that landmark law.  If Welsh Government is to go ahead with the bypass scheme, it is essential that it does so in a way that protects safety and improves access for walking and cycling.

“The route cuts across a number of important walking and cycling routes, and as it stands, the current proposals will make it harder and more dangerous for people going to and from work or school, running an everyday errand, or enjoying the beautiful countryside Gwynedd has to offer.  Whilst walking and cycling will bear the brunt of these plans, drivers using the new route could also be effected.”

With the public inquiry expected to end in four or five weeks, the three charities, who have all lodged official objections, have called on Ken Skates, the North Wales-based minister responsible for transport, to re-think plans and propose improvements.

“We’re building a bypass that will last for generations.  Mistakes made will be set in stone for years to come, so it’s vital Welsh Government gets the layout right the first time round.

“Failure to do so will jeopardise safety, restrict access and ultimately cost the taxpayer more in the long-run.

“The A487 improvement is a key test of whether or not the Welsh Government is serious about following its own rules and implementing the Active Travel Act.”

The ink on the legislation was barely dry when it was already clear that far more was needed to make Active Travel work as its visionaries intended.  This is but the latest example of delivery demanding far more commitment than the Royal Assent and fine words.  In Denbigh we have seen a perfectly feasible Active Travel Route that would have kick started a Vale of Clwyd cycle routing system tossed in the bin by the county Planning Committee.  And in Conwy we have seen the attempts by CyclingUK and Sustrans to gain a safe, direct, and linked crossing of the Afon Conwy between Llandudno Junction and Conwy town stymied by a lack of flexibility in design standards that are pretty much par for the course with other developments. And the position is not much better elsewhere in North Wales>>>>>>>


Lon Efion and its users demand to be protected.  This is the latest critical test for Active Travel.  The three charities are demanding either a bridge or underpass directly across the Goat roundabout, separated from the motor traffic likely to increase in the years to come.  See for yourself some of the folk to be found walking and cycling on Lon Eifion.  Don’t they need to be encouraged and protected?

The Active Travel Act (2013) places new duties for highways authorities to consider the needs of walkers and cyclists and make better provision for them, not least in every new development. It also requires both the Welsh Government and local authorities to promote walking and cycling as a mode of transport.