Councils across Wales are blaming financial restrictions for failing to pursue traffic speed reduction policies. Evidence has shown that not only does the reduction in traffic speed lead to fewer accidents, but the severity of injuries is proportionately reduced, with cyclists and pedestrians being particular beneficiaries, with injuries being less severe below certain speeds of impact.
But for many cyclists riding on the road will remain a worry, with the chance of being clipped by a car or lorry a constant source of anxiety. Public debate has not taken on board the link between traffic density and speed, and why some cyclists choose to ride on the pavement rather than risk serious injury or worse on the road.
Too lightly a Rhyl Cllr in supporting the introduction of a 20mph speed reduction in the town, called at the same time for cyclists riding on the pavement to be subject to fixed penalties. S’funny how in public debate there is little mention of car parking on pavements which is subject to the same legislation, or the worrying incidence of drivers blatantly using mobile phones placing the lives of all  users at risk, and not just the vulnerable ones.

For the full story see
http://www.walesonline.co.uk/news/local-news/motorists-getting-away-driving-fast-9912448#rlabs=1%20sitewide 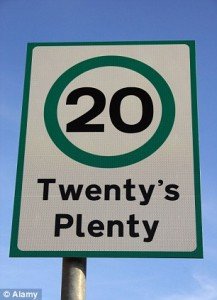