Cyclists and walkers gathered at the Goat roundabout at Bontnewydd on Monday to express their concerns about the impact the proposed Caernarfon bypass will have on the Lon Eifion trail at this location.

Public Relations Officer Bryn Williams was on hand to explain that the design of the scheme, and its integration with non-motorised user (NMU) routes,

He said the views of interest groups such as Sustrans, CTC Cymru, Ramblers Association, equestrian groups such as the BHS etc are particularly welcomed

The purpose of the consultations during Design Stage is to ensure that the needs of non-motorised users are considered carefully in the planning of new highway schemes.

Scheme Designs must always consider connectivity, and the need for NMU routes within the local and national planning contexts. For example, the Gwynedd LDP or legislative requirements for example the Active Travel Bill. In addition to these considerations, the Project Team comprises a NMU Auditor and a Road Safety Auditor (independent).

These auditors must report on the NMU provision within the design, and will identify where changes or additions to the design may need to be considered.

The consultation process is currently on-going, and responses to the Project Team are welcomed in understanding local needs in terms of NMU’s.

It was clear to those gathered that the proposals as they stand at the Goat would blow a hole in the continuity of the Lon Clwyd trail, with any realignment being less than satisfactory.

Not only would this blow yet another hole in the recently enacted Welsh Active Travel legislation, but also cast serious doubts as to whether government has yet to grasp that ill-considered actions at local levels can jeopardize any pretensions we have to reduce CO2 emissions from motor vehicles in the face the threats to the survival of future generation through Global Warming. Undoubtedly speeding up the flow of traffic will have a knock on effect by increasing substantially the number of vehicles using this road.  Have we forgotten the word ‘environment’ when we talk of sustainability?   Bypass Consultation. 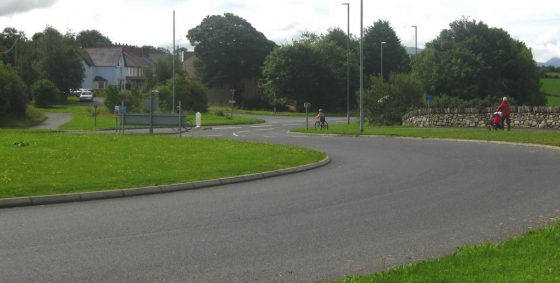