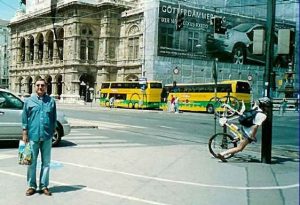 The following article, with minor adaptations for this webpage, was written around 2012 for the Forces Pension Society magazine, PENNANT by John Sullivan.    John was a Royal Air Force pilot with over 4,000 flight hours in his career, and a keen cyclist. He has a extensive experience as a crash investigator and has contributed to multiple reports. Fighter pilots have to cope with speeds of over 1000 mph. Any crashes are closely analysed to extract lessons that can be of use.  According to John the implications have important repercussions for the way drivers are trained, and how cyclists and other road users, such as equestrians, may stay safer on out highways and byways.

Our eyes alone are not designed for driving – or cycling for that matter.

We are the result of hundreds of thousands of years of evolution. Our eyes, and the way that our brain processes the images that they receive, are very well suited to creeping up on unsuspecting antelopes and spotting threats such as sabre-toothed tigers.      These threats are largely gone and they’ve been replaced by vehicles travelling towards us at high speeds. This, we’ve not yet adapted to deal with.  Why?

Light enters our eyes and falls upon the retina. It is then converted into electrical impulses, that the brain perceives as images. Only a small part of your retina, the centre bit called the fovea, can generate a high-resolution image. This is why we need to look directly at something, to see detail.   The rest of the retina lacks detail but it contributes by adding the peripheral vision. However, a mere 20 degrees away from your sightline, your visual acuity is about 1/10th of what it is at the centre.

That’s not to say that we cannot see something in our peripheral vision – of course we can. As you approach a roundabout, you would be hard pressed not to see a huge lorry bearing down upon you, even out of the corner of your eye – obviously, the bigger the object, the more likely we are to see it. But would you see a motorbike, or a cyclist?

To have a good chance of seeing an object on a collision course, we need to move our eyes, and probably head, to bring the object into the centre of our vision – so that we can use our high-resolution vision of our fovea to resolve the detail.

Here’s when things get interesting…..

When you move your head and eyes to scan a scene, your eyes are incapable of moving smoothly across it and seeing everything. Instead, you see in the image in a series of very quick jumps ( saccades) with very short pauses (fixations) and it is only during the pauses that an image is processed.

Your brain fills in the gaps with a combination of peripheral vision and an assumption that what is in the gaps must be the same as what you see during the pauses.

This might sound crazy, but your brain actually blocks the image that is being received while your eyes are moving. This is why you do not see the sort of blurred image, that you see when you look sideways out of a train window.

The only exception to this, is if you are tracking a moving object.

A Test to Make the Point…..

You can’t see your own eyes move because your brain shuts down the image for the instant that your eyes are moving. This is called Saccadic masking.

In the past, this served us well. It meant we could creep up on antelopes without our brain being overloaded by unnecessary detail and a lot of useless, blurred images.

Why Cycles and Motor Cycles may be unobserved at traffic junctions.

At a traffic junction all but the worst of drivers will look in both directions to check for oncoming traffic. However, it is entirely possible for our eyes to “jump over” an oncoming bicycle or motorbike.

The smaller the vehicle, the greater the chance it will fall within a saccade.   This isn’t really a case of a careless driver, it’s more of a human incapacity to see anything during a saccade. Hence the reason for so many “Sorry mate, I didn’t see you” excuses.    The faster you move your head, the larger the jumps and the shorter the pauses. Therefore, you’ve got more of a chance of missing a vehicle.  We are effectively seeing through solid objects, with our brain filling in the image.     Additionally, we tend to avoid the edges of the windscreen. The door pillars on a car therefore create an even wider blindspot. This is called windscreen zoning.

Our ears help us build up a picture of our surroundings. However, when inside our cars or cycling with music playing, our brain is denied another useful cue. Additionally, bicycles are almost completely silent, so won’t be heard by car drivers, or other cyclists and pedestrians on a shared use path.

Let’s say you are a driver motoring along.  You approach a junction and you notice a lack of traffic. You look left and right and proceed forward. Suddenly you hear the blast of a horn, as a motorbike flashes in front of you, narrowly avoiding an accident.  What just happened?   On your approach, you couldn’t see there was another vehicle on a perfect collision course. With a lack of relative movement for your peripheral vision to detect and the vehicle being potentially hidden by being near the door pillar, you miss it entirely.   Lulled into a false sense of security you looked quickly right and left, to avoid holding up the traffic behind you, and your eyes jumped cleanly over the approaching vehicle, especially as it was still close to the door pillar in the windscreen. The rest of the road was empty, and this was the scene that your brain used to fill in the gaps! Scary, huh?

You were not being inattentive – but you were being ineffective.    Additionally, if you didn’t expect there to be a cyclist your brain is more likely to automatically jump to the conclusion that the road is empty.

Now that you’ve been warned. What can you do?

Slow down on the approach of a roundabout or junction. Even if the road seems empty. Changing speed will allow you to see vehicles that would otherwise be invisible to you.
A glance is never enough. You need to be as methodical and deliberate as a fighter pilot would be. Focus on at least 3 different spots along the road to the right and left. Search close, middle-distance and far. With practise, this can be accomplished quickly, and each pause is only for a fraction of a second. Fighter pilots call this a “lookout scan” and it is vital to their survival.
Always look right and left at least twice. This doubles your chance of seeing a vehicle.

Make a point of looking next to the windscreen pillars. Better still, lean forward slightly as you look right and left so that you are looking around the door pillars. Be aware that the pillar nearest to you blocks more of your vision. Fighter pilots say ‘Move your head – or you’re dead’.
Clear your flight path! When changing lanes, check your mirrors and as a last check, look directly at the spot which are going to manoeuvre.

Drive with your lights on. Bright vehicles or clothing is always easier to spot than dark colours that don’t contrast with a scene.
It is especially difficult to spot bicycles, motorbikes and pedestrians during low sun conditions as contrast is reduced.

Keep your windscreen clean – seeing other vehicles is enough of a challenge without a dirty windscreen. You never see a fighter jet with a dirty canopy.

Finally, don’t be a clown – if you are looking at your mobile telephone then you are incapable of seeing much else. Not only are you probably looking down into your lap, but your eyes are focused at less then one metre and every object at distance will be out of focus. Even when you look up and out, it takes a fraction of a second for your eyes to adjust – this is time you may not have.

Recognise the risk of being in a saccade. High contrast clothing and lights help. In particular, flashing LED’s (front and rear) are especially effective for cyclists as they create contrast and the on-off flashing attracts the peripheral vision in the same manner that movement does. There’s nothing wrong with leaving these on during the day. (Especially if they are rechargeable)

The relatively slower speed of bicycles means that they will be closer to a point of collision if a vehicle begins to pull into their path. Turn this to advantage – when passing junctions, look at the head of the driver that is approaching or has stopped. The head of the driver will naturally stop and centre upon you if you have been seen. If the driver’s head sweeps through you without pausing, then the chances are that you are in a saccade – you must assume that you have not been seen and expect the driver to pull out!

Recognise that with a low sun, a dirty windscreen or one with rain beating against it drivers are likely to have less of a chance of seeing you.
Take a cycle training course – this will teach you where you need to be positioned on the road, how to use your eyesight to make sure drivers pay you attention and other useful techniques that can minimise dangers.