Porthmadog – a railway with a twist in the tail for cyclists. 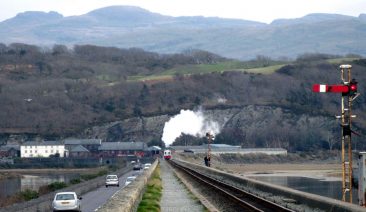 Porthmadog is admired for many things linking its fascinating history to life in the town today.  Not least its popularity as a tourist attraction, with rail terminals for both the Ffestiniog, and Welsh Highland Railways.

Since passenger rail services returned to the town some years ago however, there have been persistent complaints from cyclists caught in the rail lines running up the middle of the A547 through the town centre.

Those familiar with the lines will have learnt how to negotiate them safely.  But for those cyclists unfamiliar with the town, such as those touring by bike using National Cycle Route 8, to come across the rails without warning has posed a risk of serious injury.  For local cycle activists it has been a a cause of deep concern, with the fear that the well-being of cyclists was being ignored..

Complaints and suggestions for resolving the problem have been voiced for many years, with little sign the problem would be solved.  However In July 2014 a roughly daubed warning for cyclists appeared in white paint on the road surface leading to the hazards.  We can only guess the identity of that lady or gent, but this person or persons were clearly driven to distraction by the fear of a tragedy waiting to happen.

Out Springs a Good Samaritan to Save the Day.

Now CyclingNorthWales can report that at long last the the highway authority has jumped to attention with surface signage that even someone half asleep couldn’t fail to see.  Well done the mysterious cyclist!   And well done Gwynedd Highways Dept.

Did we hear in the distance something like the whistle of the Titfield Thunderbolt?? 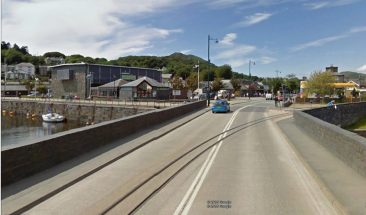 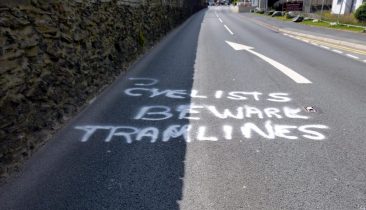 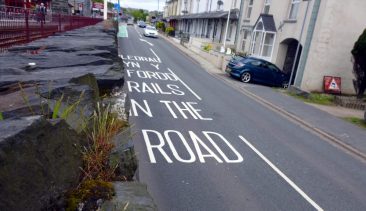