A meeting was held at Caban Brynrefail On Saturday 11th January 2020 to sound out support for campaigning for the use of the former rail line between Llanberis and Cernarfon as an Active Travel route.

Almost fifty members of the public turned up at two days notice.   Support for the campaign was unanimous.

Bryn said several soundings had been made and found promising.   However there was a measure of resistance from some landowners fearing negative encroachment..   However there was one landowner present, Malcolm Jones, who fully supported the proposal.  Not least because there was no attractive or safe way in which non motor users (NMUs) could travel between Caernarfon and Llanberis other than by off-road grade separation.

Gwynedd CC is understood to have advanced draft proposals for an on-road Active Travel route linking the towns.  The mood of the meeting was that the intimidating road environment would not induce many, if any NMUs to use the facility .   It was seen to be ‘dangerous’, of limited scenic value, and possibly attractive to the council as a cheap option.  The costing of the scheme was not known.


There was unanimous support for setting up a lobbying group.  Title to be decided.   Lon Las Seiont found favour.  It would seek to engage initially with Gwynedd CC and thereafter with stakeholders both public and private. Those present were urged to lobby their council members and community contacts.  Clearly a project with profound quality of life benefits for all in the years to come.

Agreed timing is of the essence..  CyclingUK offered support and agreed to contact Sustrans Cymru.

Subject to a satisfactory feasibility study,  and Irrespective  of the ‘official’ active travel route proposals thus far, this alternative route should be regarded as a project in its own right.  It deserves wide community support.  The criticism of the ‘official’ Active Travel route (yet to be confirmed) does raise questions about the consultation process. Not least in relation to provision for cycling. There does seem  to be a serious  disconnect 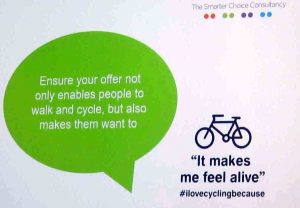 between deliverers and users of active travel facilities..  Apposite- You can take a horse to the trough, but you can’t make it drink