The helmet debate goes on and on. If there was a clear injury prevention benefit from wearing helmets then western lawmakers, including UK Parliament, Scots Parliament or Welsh Assembly would have legislated to make them compulsory 20years ago. The evidence is overwhelmingly ambiguous about benefits/disbenefits. There is some evidence that young children have a clinical vulnerability to skull fracture due to thinner skulls until about age 14. For young children there is a general presumption in favour of wearing helmets (if being ridden at 10mph on a bike seat behind dad, etc etc). For adults there is no statistical benefit either way. A helmet will help prevent certain injury but exaccerbate other types of injury. 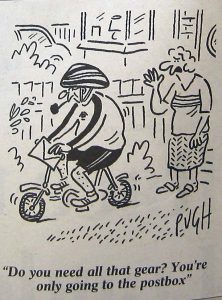 Logic says that a helmet will protect you. However, it is more complex that this because the things that cause death are often Audis travelling at 40mph at the point of impact or 20tonne goods vehicles crushing cyclists at left turn junctions. A helmet will do little to protect cyclists from the threats that affect mortality. If you are riding on MTB trails or downhill at 20mph- 50mph helmets will provide some benefits. However, it also increases the diameter of your head by 2-3 inches. This will increase the turning moments around the head if you strike a kerb or solid object. Sadly this will increase the likelihood of death or paralysis due to neck fracture Transport scientists have reseached this for a number of western governments and have reached neutral conclusions.

Overall helmets give some protection but introduce risks. To get real benefits you would need to wear a proper motorcycle helmet with enveloping closed cell foam supporting the upper neck and a hard polycarbonate or carbon fibre reinforced plastic (“Carbon”) or GFRP (“Fibreglass”) hardshell. However, this type of helmet is too cumbersome, too heavy and are too sweaty for cycling. It obscures vision after only 10mins and is just not practical. Modern polystyrene helmets were pioneered in California during the late 70s. They are not strong enough or supportive enough to protect users from the type of impacts that will kill them. Calls to wear helmets are sincere and well meant. But they are not matched by the science.

Britain, France, Belgium, Spain and Italy have a long way to go before they reach this standard. Well designed cycling and walking infrastructure (paths, intersections, cycle routes, pedestrianised precincts) protects people not helmets. I personally wear a helmet but absolutely defend other peoples’ right not to do so. They are of no statistical benefit for normal cycling at the speed range 5-15mph (normal cycling). Proper paths and infrastructure separate riders from cars and trucks. It is cars and trucks that cause most deaths.