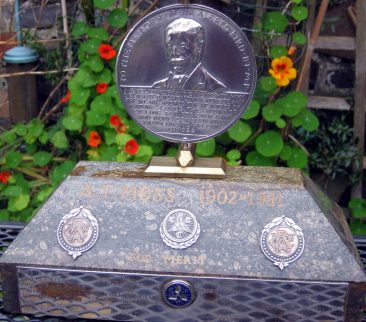 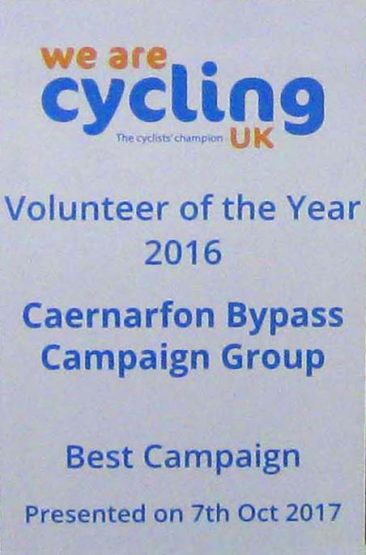 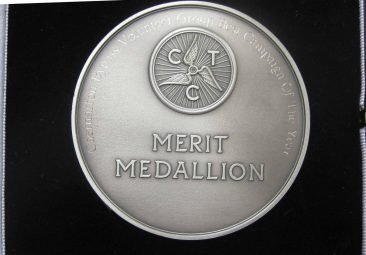 At a members meeting in Birmingham on the 7th October 2017,  CyclingUK  awarded its highest honour for outstanding service to cycling, to the campaign team that gave evidence at the Caernarfon Bypass public inquiry.
The proposed bypass impacts on National Cycle Route 8 at several locations and the team found significant shortcomings by Welsh government of its Active Travel statutory obligations to retain or enhance provision for walking and cycling. 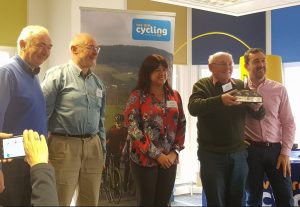 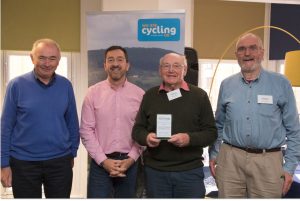 At the Inquiry the team found close allies in Sustrans Cymru, the British Horse Society,  Ramblers Association, and the charity Antur Waenfawr.   The latter employs adapted cycles in its client training programmes.    All stressed the need for a bridge or underpass at the Goat roundabout, Llanwnda.  In demonstrating a spectrum of Lon Eifion users, the Inquiry inspector permitted the playing of a Youtube Video.  He admitted gaining much pleasure from the showing.

The awaited Welsh government’s decision on the Goat roundabout  will provide a marker as to how serious it is about delivering upon the spirit its own Active Travel legislation. This will require a shift in public attitudes to local travel on foot and by bicycle; the signs are cautiously hopeful but pragmatic given past fine words.

But most importantly, there needs to be a seismic change in government culture from parish pump politics to the leadership of elected members and  their professional counter parts.  Too often Active Travel is delegated to staff members with  limited influence on key decisions capable of converting political rhetoric into infrastructure that makes sense at ground level.   Whilst outstanding cycling provision does exist around North Wales, there are dreadful examples of cycling being marginalised, with little or no regard for the comfort and safety of those travelling under their own steam.  This is a source of must frustration to voluntary agencies with limited resources and unable to partner with opaque bureaucracy.