The Desperate Need  For Prioritising Trees over Tarmac and Concrete.

At the corner of a field on the outskirts of the North Wales coastal resort town of Prestatyn, sits the bleached skeleton of an elm tree within the grounds of Rhyd Farm, Dyserth (GR048806)

Featuring CTC/CyclingUK members Cliff Jones and Gwyn Roberts, this photograph was taken in 2005.  The once abundance of elms throughout  the UK was being devastated at the time  by the arrival of Dutch Elm Disease.

Inland from the town, the Vale of Clwyd witnessed the relentless felling of diseased trees, but this landowner had decided he wished to retain a memory of where this tree proudly stood.  Although it can be seen that the once leaf laden branches had extended across the adjacent lane, no doubt for safety reasons these have since been removed but the trunk remains fifteen years later. We might wonder whether the landowner wished the memory of this tree to be retained for reasons of sentiment.   Perhaps so. But being on view to all passing travellers it must stand out as a pressing reminder of the climate change environmental crisis on our doorstep.

On the cusp of the year 2021 we are now confronted by another invasion threatening to wipe out 95% of  Ash trees in the UK. .  As far back as 2012 it was recorded at several sites in Wales, including the Glynllifon Estate, Gwynedd.    From this initial outbreak the infection has now spread to the nearby tree canopy of National Cycle Route 8 (Lon Eifion).  A recent survey suggests much of this rich leafy cover will be lost to travellers in the years to come unless drastic action is taken, This must include in the further term, the massed planting of species more resilient to climate change and other factors, demanding human intervention if climate chaos is to be held in check.

Instead of thinking in terms of how unrestrained traffic growth can be encouraged to travel further and faster, the natural environment is crying out for support and salvation.

We should be asking ourselves in the interests of the planet, how many trees can be planted on that land allocated to road building?  And how many miles of active travel routes can be constructed to replace journeys undertaken by the private car that could see easily have been undertaken by public transport. Or simply riding a bike or walking!   The vast majority of journeys over a mile are made in a car or van—even for distances of 1–2 miles.  Over 60% of journeys are made by motor vehicle – (Parliamentary Report on Active Travel)

Caernarfon Bypass.  Representatives of cycling and walking interests were treated almost as hostile witnesses at the Public Inquiry into the Caernarfon Bypass; they gave evidence in support of an underpass or bridge at the Goat roundabout..   That plea failed.    This video was played during the inquiry illustrating the range of users, some of whom would be discouraged by the proposed diversion

Elms produce saplings from wide spreading roots.  These invariably grow to a limited height before falling victim to the disease and dying.  Saplings were to be seen in adjacent hedging at the time the above photo was taken fifteen years ago.  Intriguingly recent Google images show evidence of promising tree growth, followed by felling.  Seems there may be an interesting story to tell here…… 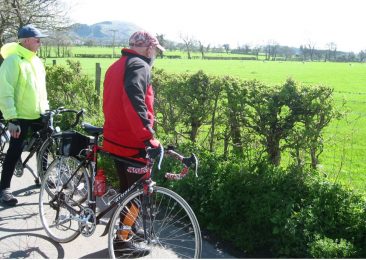 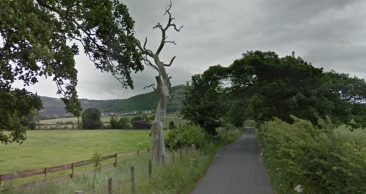 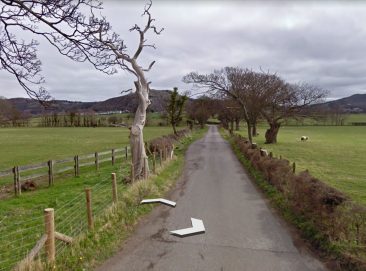